Sequoyah, also known as George Guess and George Gist, is best known for his development of the Cherokee syllabary, a notational system that transcribed the sounds of spoken Cherokee into a written form. But during his long life, Sequoyah played many roles in Cherokee society.

Sequoyah was born circa 1770 to a Cherokee mother and an Anglo-European father. There is no record of his having a formal education. He made a living at various periods as a blacksmith and a silversmith, trades that developed as a result of Cherokee contact with European culture, although he was a traditionalist in supporting Cherokee cultural and territorial integrity.

When the first large group of Cherokee prepared to move from the Cherokee heartland of Tennessee, North Carolina, and Georgia to Arkansas in 1818, Sequoyah at first declared his intention to move west but instead settled his family near Willstown in northeast Alabama. Here, he likely began work on his syllabary. Though it is not known what inspired him toward this goal, he certainly understood the power of written communication after interacting with white people for much of his life.

In 1824, the Cherokee Council at the Cherokee capitol of New Echota, Georgia, commissioned a medal to be presented to Sequoyah for creating a written form of their language, but by then he had moved to Arkansas and did not receive it until 1832. The first major result of the syllabary was Elias Boudinot’s first issue of the Cherokee Phoenix, a bilingual Cherokee newspaper published at New Echota in 1828. Many books and other materials were quickly published in Cherokee, including the New Testament and various hymns.

Sequoyah moved to Arkansas in 1824. His reasons are unknown, but they probably included a desire to retreat from U.S. encroachment and pressures for Cherokee removal. Sequoyah was also interested in the potential economic advantages of the sparsely settled Arkansas River Valley. He lived in the vicinity of Illinois Bayou in Pope County before removing west of Fort Smith (Sebastian County) in 1828. He was in a delegation of western Cherokee that went to Washington DC in 1828 to resolve several issues with U.S. authorities, including land rights and boundaries in Arkansas. Unexpectedly for the Cherokee, the delegation was pressured into exchanging its Arkansas lands for territory in what was then called Lovely’s Purchase, a tract that ran west of the territorial border into what is now northeast Oklahoma. Delegates received special considerations for making this agreement. Sequoyah received money and a salt works on Lee Creek to replace the one he had operated in Arkansas. This exchange, the Treaty of 1828, ended western Cherokee settlements in Arkansas.

The Arkansas Cherokee became known in Indian Territory as the Old Settlers. After the eastern Cherokee arrived in 1839 after their forced removal along the Trail of Tears, factional disputes between the two groups, and the possible arrival of the Texas Cherokee, who had been forcibly pushed north of the Red River that year, threatened the creation of a reunified Cherokee society. Sequoyah emerged as one of the leaders who was able to act as mediator in reconciling the factions and fashioning a new political entity, the Cherokee Nation, in 1839, though factional differences over several issues would continue to be a source of strife for the group.

In 1842, Sequoyah went to Mexico, accompanied only by a few companions, in hopes of finding any Cherokee who had migrated there and persuading them to return to the Cherokee Nation. After several unfortunate events, including being stricken with a severe illness, Sequoyah died near San Fernando, Mexico, in August 1843.

Hoig, Stanley W. The Cherokees and Their Chiefs. Fayetteville: University of Arkansas Press, 1998.

Green, Michael D. “The Expansion of European Colonization to the Mississippi Valley, 1780-1880.” In The Cambridge History of the Native Peoples of the Americas. Vol. 1, North America, edited by Bruce G. Trigger and Wilcomb E. Washburn. Cambridge, England: Cambridge University Press, 1996.

Nathaniel Gist was the son of Christopher Gist, who was an American surveyor and comrade of George Washington, and White Rose. 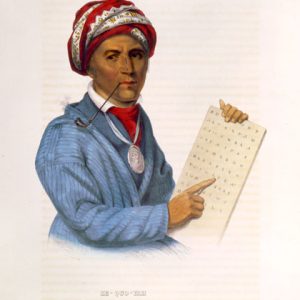