Rich Mountain, at 2,681 feet above sea level, ranks as Arkansas’s second-highest peak and the highest point in the U.S. Interior Highlands and the Ouachita National Forest. Its long ridge in western Arkansas (Polk County) is occupied by the fifty-four-mile Talimena Scenic Byway, a National Scenic Drive that traverses the entire ridge to extend farther westward into Oklahoma to the Winding Stair Mountains of Le Flore County. In Arkansas, the ridge begins on Arkansas Highway 88 (Skyline Drive) north of Mena (Polk County) and eventually turns into State Highway 1 on the Oklahoma side and begins just north of Talihina near Talimena State Park.

At the apex of Rich Mountain is a fifty-eight-foot observation tower constructed in 1952 and used for fire detection and prevention until 1975. It was reported to have replaced an unusual wooden cab perched atop a twenty-foot log tower with a ground house living quarters that was once occupied by a pioneering family. Shown on a forest service placard at this location is a short description of the history of the family that originally lived in the tower, their jobs, and hardships incurred from living in the wilderness.

The 192-mile Ouachita Trail begins to the west in Talimena State Park. It is the primary hiking trail on Rich Mountain, and it runs eastward nearly parallel to the ridge of Rich Mountain; it comes to an end at Pinnacle Mountain State Park near Little Rock (Pulaski County). Another noteworthy trail on Rich Mountain, just north of Mena, is the trailhead for the Earthquake Ridge Trail, composed of a series of loop trails totaling about 6.8 miles. It supports both hiking and mountain biking.

Located atop Rich Mountain is Queen Wilhelmina State Park, which offers impressive views of the region. In the late 1800s, the original Victorian lodge was built as a resort named Wilhelmina Inn in honor of the young queen of the Netherlands, Wilhelmina Helena Pauline Maria (1880‒1962). The latest inn is the newly renovated lodge (closed to the public in 2012 and reopened in 2015), the top attraction at the park. In addition to the forty-room lodge, the park includes campsites (both tent and RV), picnic areas, and several short trails on the mountain. Near the entry to the state park just off Arkansas Highway 88 is Arkansas Highway 272, which is a 1.6 mile highway that runs south and comes to a dead end into the township of Rich Mountain.

Just to the west of Queen Wilhelmina State Park, an informational park sign points to a short trail just off the south side of Highway 88 leading to the historic Rich Mountain Pioneer Cemetery.

Rich Mountain supports several endemic species, including invertebrate and vertebrate biota. Invertebrates include an earthworm, Diplocardia meansi, known only from its type locality on Rich Mountain. Interestingly, D. meansi is the second-longest worm found in North America, and it is also bioluminescent. Other noteworthy species are the Mountain Cave amphipod (Stygobromus montanus) and a millipede (Abacion wilhelminae) that occurs nowhere else on earth but Rich Mountain. It is found at a few specific sites on the mountain and is considered a species of greatest conservation need. An endemic vertebrate of Rich Mountain is the Rich Mountain salamander, Plethodon ouachitae. It and other Plethodon salamanders of the surrounding mountains (Caddo, Fourche, and Iron mountains) possess traits that vary from one locale to another. 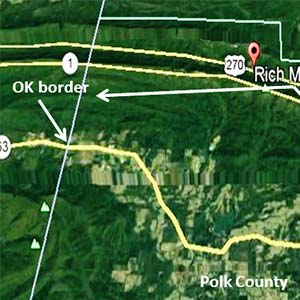