Located on approximately five acres to the southeast of Jonesboro (Craighead County) at 2801 Harrisburg Road, the Patteson House was built in 1961–1962 and designed in the Mid-Century Modern style by Arkansas architect F. Eugene Withrow. It was listed on the National Register of Historic Places on January 23, 2020.

Alan Patteson Jr. was born in Jonesboro and attended the University of Missouri in Columbia. His occupations included farming and cotton ginning, as well as owning and operating AM/FM radio stations in Jonesboro for thirty-five years. His wife, Carol, was originally from Long Island, New York, and she and her family moved to Memphis, Tennessee, when she was sixteen. She graduated from Hutchison Girls School in Memphis and Stephens College in Columbia, where she and Alan met. They married in 1952.

By the late 1950s, their family had become too large for their first small home, and they decided to build a new home on seven wooded hilltop acres south of the Jonesboro city limits. The Pattesons hired Little Rock (Pulaski County) architect Frank Eugene Withrow to design their house. Withrow had just finished a commission for the Tower Building in Little Rock, the tallest building in the state at the time; he was also a relative of the Pattesons, having recently married Alan Patteson’s first cousin.

The boomerang-shaped house rests on a continuous cast-concrete foundation and is topped by a shallow tar built-up gable roof. The house’s walls are a mixture of fieldstone and vertical board. The windows are a mixture of stationary single-pane and one-over-one, double-hung. Set in the eastern half of its site, but back from the road, the Patteson House is very private, even though housing subdivisions were later built in the area.

The house’s walls are a mixture of fieldstone (called flintstone in a 1963 article on the house) that came from Batesville (Independence County), along with vertical board that is made of redwood. Many of the windows on the front façade are set high in the walls, allowing for light to come into the house, but maintaining the privacy from the street. The rear of the house, on the other hand, has large areas of glass, allowing expansive views to the south. The house also has several sets of sliding-glass doors.

The interior of the house has the public areas in the western half, including a family room, study, kitchen, breakfast room, bathroom, and dining area. The center of the house has the entry and living room, while the eastern half has the family areas, including the bedrooms and bathrooms. Natural materials continue inside, notably with the use of Arkansas pine on the ceilings and also for the ceiling beams.

When the Patteson House was finished, it was the subject of an article in the Memphis Press-Scimitar on April 26, 1963. The article noted that the house was “of contemporary design” and that “the wings of the house spread out in a shallow V, rather like [those] of a bird in flight.” In addition to the house, the property has a swimming pool and shed, both of which are non-contributing, added in 1995. Other than that, the property has remained intact from the time of its construction, and the high degree of integrity found on the inside of the house is also a result of the property remaining under the care of the original owners. The setting of the property, although smaller by a couple of acres than it was originally, has retained the rural isolated feel that it had when the property was built in the 1960s.

The Patteson family has retained ownership of the house from the time that it was constructed until the present day. 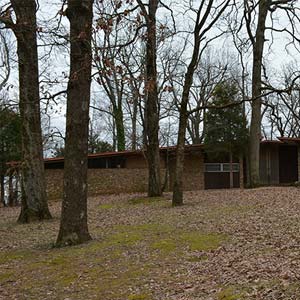