Oakland & Fraternal Historic Cemetery Park was established in 1862 when the City of Little Rock (Pulaski County) purchased a 160-acre estate in order to accommodate the Civil War dead. Through the years, this 160-acre estate has been carved into seven distinct cemeteries: Oakland, National, an eleven-acre Confederate, a one-acre Confederate, Fraternal, Jewish Oakland, and Agudath Achim. Today, 108 acres of the original 160 remain as burial grounds. The cemeteries have seen more than 62,000 burials since the first in 1863.

The land was originally “christened Oakland, probably because the site which was chosen for it was natural forest, wooded principally with oaks,” according to an 1862 Arkansas Gazette article. The need for a city cemetery then, during the Civil War, was great with “many soldiers dying almost daily in the emergency hospitals of Little Rock.” In 1863, Union troops set up an encampment in the cemetery and began burying their dead. After the war, the United States purchased land at Oakland and, in 1868, officially established the Little Rock National Cemetery.

In 1888, a number of African-American fraternal orders petitioned the City of Little Rock for land at Oakland. The city granted their request and gave the benevolent societies fourteen acres. In 1893, their burial ground was named Fraternal Cemetery. The fraternal groups and their members surveyed and plotted the land and put in cobblestone streets and an iron gate at the entrance. A granite marker was placed in the cemetery which read, “Free American Citizens.” 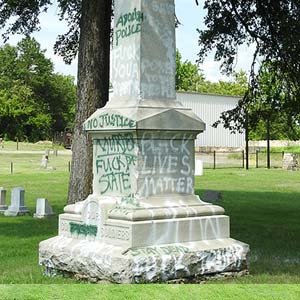