The Mount Pleasant Academy was established in 1878 at Barren Fork (now Mount Pleasant) in Izard County. The two-story frame structure was situated on a hilltop overlooking the little community of about 100 people. Built with donated funds, materials, and labor, it operated under a board of directors.

The area was settled during the 1850s, mostly by pioneer farmers from Tennessee and Kentucky with Scots-Irish ancestry. They established a church before building the village of Barren Fork, which was named for a creek that flows nearby and joins Poke (or Polk) Bayou in Independence County.

The academy was named for the hill where it was located. It always had close ties to the two local Cumberland Presbyterian churches because most of the students, faculty, and trustees were of that denomination. The academy was geared to producing candidates for the ministry and school teachers. Some graduates went on to university study or medical school.

Founded as a private school, the academy charged tuition fees ranging from $1 per month for small children to $3 for young adults. Mount Pleasant normally had a teaching staff of three for all grades. The instruction was meticulous and emphasized culture and integrity. In addition to basic subjects for youth, the school offered classic literature, Latin, and higher mathematics for those planning to further their education elsewhere.

Professor Hooper was perhaps the most renowned head of the academy. A native of Georgia, he was born in 1854 and attended the La Crosse Collegiate Institute in Izard County and Arkansas Industrial University—now the University of Arkansas (UA) in Fayetteville (Washington County). He married Mary T. Bishop in 1882, just prior to his long association with the Mount Pleasant Academy. The school helped build the town. By 1885, Barren Fork had three general stores, one drug store, a wheelwright and blacksmith, two churches, a school, and a population of 225 citizens.

The tragic end of the original academy building was recorded in the personal diary of Lula Ogilvie, a resident of Barren Fork at the time: “Ever remember the night of January 10, 1905, at about 11 o’clock, the school house burned.”

Hurriedly, another two-story frame structure was erected to house the institute. Sometime shortly after 1908, the academy became a free, public school. The second building served until 1934, when a modern school campus was constructed under the Works Progress Administration (WPA) and the National Youth Administration (NYA).

In 1914, the town of Barren Fork changed its name, by petition, to Mount Pleasant. This was the people’s way of perpetually honoring the old academy. 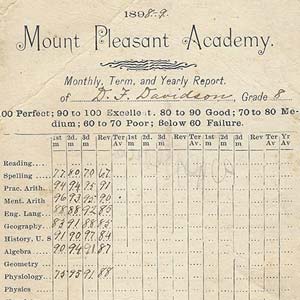