Marlsgate and the Dortch Plantation

Marlsgate sits at the center of the Dortch plantation, located near Scott (Pulaski and Lonoke counties). Marlsgate occupies the site of an earlier plantation house and faces Bearskin Lake, one of the many small lakes formed by the changing course of the nearby Arkansas River. Marlsgate was designed by noted Arkansas architect Charles L. Thompson and was completed in 1904. Together, the house and outbuildings represent plantation life in the mid-South during the late nineteenth and early twentieth centuries.

Marlsgate is a two-and-a-half-story structure crowned with a high, hipped roof. A two-story portico, supported by square brick columns with Ionic capitals, dominates the façade. A second-story balcony projects over the entry and features urn-shaped balusters and paired brackets. The interior of Marlsgate features fourteen-foot ceilings of pressed tin, each with a different design.

The Dortch family migrated west from North Carolina in 1838 when Willis Reeves Dortch settled in Williamson County, Tennessee. Dortch established a successful farming operation and married Elizabeth Womack Stone. The couple had three children, and when Willis Dortch died in 1858, his wife and children, including twelve-year-old William P. Dortch, moved to Arkansas and settled in Lonoke County.

In 1864, William Dortch enlisted in the Confederate army, serving in Anderson’s Battalion from Little Rock (Pulaski County). After the war, he attended Miami University in Ohio, married Alice Orr, and returned to Arkansas to farm. Before Alice’s death in 1874, the couple had one son, Frederick W. Dortch.

The Dortch family’s nearest neighbor was Thomas William Steele, a North Carolinian who had become the largest land holder in Pulaski County. On January 15, 1885, the widower William P. Dortch married Nettie Steele, a daughter of Thomas W. Steele. As a wedding present to his daughter, Steele presented the couple with an 1,800-acre plantation adjoining the Dortch property in Lonoke County. Shortly after their marriage, the couple moved to their newly acquired property, and by 1895, they had five sons. Their success in subsequent years made it possible for the construction of Marlsgate, and their sons and grandsons continued to operate the farm throughout most of the twentieth century.

On January 6, 1975, Marlsgate was added to the National Register of Historic Places, followed by the Dortch Plantation on March 21, 1979. By the early twenty-first century, the house was sold by the Dortch family. It is now open to the public for weddings, parties, and receptions. 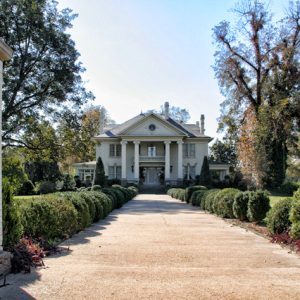