The Maness Schoolhouse, located at 8801 Wells Lake Road near Barling (Sebastian County), is a 1937 structure built with the assistance of the Works Progress Administration (WPA), a Depression-era federal relief program. It features a porch and amenities constructed in 1943 by German prisoners of war (POWs) held at Camp Chaffee. It was listed on the National Register of Historic Places on May 29, 2003. In 2015, the building was rehabilitated to become a restaurant.

The first school in the area south of Fort Smith (Sebastian County) near Barling known as Massard Prairie consisted of a log building, which was later replaced by a wood-frame structure, known as the Massard Schoolhouse, all around the mid-to-late nineteenth century. Another school building was constructed in 1889 near the Massard Post Office on the Little Rock Road, and since it was also known as Massard Schoolhouse, the earlier building was renamed for the family living nearest to it, that of John Maness.

A red-brick school was built in 1930 to replace the frame Maness Schoolhouse, but it burned in November 1936. The community turned to the Works Progress Administration for funding for a replacement, which apparently was procured in 1937.

WPA workers, including local stonemason Joe Bullington, constructed a one-room school from native sandstone, and the National Register nomination notes that “the dressed stone, thin mortar joints and fine ashlar work found at the Maness school indicated the hand of a trained stonemason.” The main entrance features two doors and a gabled porch roof, along with banks of double-hung windows. The rear façade also features a number of windows and a single door, while the north and south sides of the building are blank with the exception of wooden vents placed in the ends of the gabled room.

The building had electricity, and one student of Maness Schoolhouse remembered that novelty, writing years later that “the new schoolhouse had electric lights and they had a disastrous effect on our eyesight. Before we never complained about a cloudy day, but now, just one little cloud [could] go over the sun and we couldn’t see and begged to have the lights turned on.”

With the advent of World War II, the U.S. Army acquired 72,000 acres for construction of a military base, which included the Massard community. Some 1,300 families were relocated from their homes, and most of the buildings in the area that became Fort Chaffee were moved or razed. The Maness Schoolhouse, having just been built a few years earlier, was the only structure that was retained. The army converted it into a recreational facility for soldiers at Fort Chaffee, installing a bathroom and replacing a rear window with a door to enable visitors to go out on the porch.

The full, open porch with stone balustrades was built by German POWs, who left a concrete plaque reading “Built by German Prisoners of War 1943.” They also constructed a stone barbecue pit north of the school.

When the Department of Defense announced the closing of Fort Chaffee as part of the Base Realignment and Closure program in 1995, Maness Schoolhouse was noted as a historic resource to be preserved. Along with much of the former base, it was turned over to the Fort Chaffee Redevelopment Authority. The building sat vacant until it was rehabilitated in 2015 to house Stonehouse at Chaffee Crossing, an upscale restaurant. 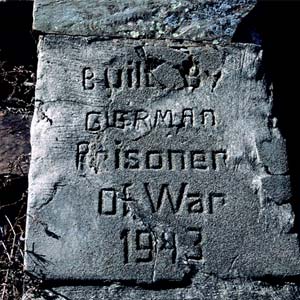