John Marshall Robinson was a prominent physician, civic leader, and co-founder and president of the Arkansas Negro Democratic Association (ANDA). As a physician, Robinson performed pioneering medical surgery and was involved with a number of medical institutions and organizations in Little Rock (Pulaski County). As a politician, Robinson was the main voice in the state demanding equal black participation in the Arkansas Democratic Party between 1928 and 1952.

Born on July 31, 1879, in Pickens, Mississippi, John Robinson was one of eight children of Isabell Marshall and Amos G. Robinson. Robinson attended Rust College in Holly Springs, Mississippi, and graduated from Meharry Medical College in Nashville, Tennessee, in 1904. While in Nashville, Robinson met and married India Cox. Robinson’s only child, John Marshall Robinson Jr., was born in 1903. Before completing his studies at Meharry, Robinson passed the Arkansas Board of Medical Examiners exam. He practiced medicine in Newport (Jackson County) from 1901 to 1904. In 1904, Robinson completed his medical studies at Knoxville Medical College in Tennessee. He then returned to Newport, and, in April 1905, he co-founded the Pulaski County Medical, Dental and Pharmaceutical Association with Little Rock physician John G. Thornton. In 1906, Robinson opened a medical practice at 7th and Main streets in Little Rock. With no hospitals for African Americans in the city, he was forced to conduct medical procedures, including surgery, in his office.

In February 1911, Robinson was confronted by the suitor of a woman with whom he was having an affair. Robinson shot and killed the man. He received a five-year sentence for self-defense manslaughter, although he was released less than two years later for carrying out pioneering surgery while incarcerated when he removed a bullet from a fellow inmate’s heart. Following the 1944 elections, Governor Homer Adkins granted him a full pardon.

Robinson resumed his medical career, and, in 1918, he and three other black physicians founded Bush Memorial Hospital in Little Rock, named after black Republican leader John E. Bush. The same year, Robinson became a founding member of the Little Rock branch of the National Association for the Advancement of Colored People (NAACP). In 1919, he began work as assistant surgeon at the Missouri-Pacific Hospital. In 1921, Robinson’s wife died; he married Myrna Hayes of Camden (Ouachita County) in 1923. From 1927 to 1929, Robinson served as Bush Memorial Hospital’s chief surgeon. Financial difficulties led to the closure of the hospital in 1929. He then became chief surgeon of the Royal Circle of Friends Hospital from 1929 to 1933. In 1933, he became chief surgeon at Lena Jordan Hospital, a post he retained for more than twenty years.

In 1928, Robinson co-founded and became president of ANDA to fight the exclusion of black people from voting in Arkansas’s Democratic Party primary elections. Robinson and ANDA petitioned the courts for redress in 1928 and won a temporary restraining order, but the decision was overturned. Robinson and ANDA then sued for the right to vote in Robinson v. Holman (1930). The Arkansas Supreme Court upheld the use of all-white primaries, and the U.S. Supreme Court refused to hear the case on appeal. Only in 1944 did the Court finally rule, in the Texas case of Smith v. Allwright, that the use of all-white primary elections to disfranchise black voters was unconstitutional, though it continued in Arkansas in an altered fashion until 1950.

Soon after the changes, Robinson announced his retirement from politics. In 1953, he was one of the first black doctors admitted to the integrated Pulaski County Medical Society. Robinson was a member of the National Medical Association and was published in the National Medical Journal. He was a staff member of the Arkansas Baptist Medical Center, St. Vincent Infirmary, and Memorial Hospital in Little Rock. In 1960, he was awarded a Certificate of Merit from the Arkansas Medical Society. Robinson was also extensively involved in civic organizations. In 1949, he won Little Rock’s (Negro) Man of the Year Award. 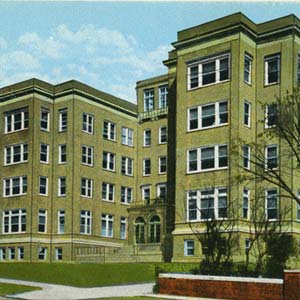