John Hallum was a prominent nineteenth-century Arkansas lawyer and historian. His efforts to record and illuminate the territory and state’s early history provided a highly readable introduction to the state’s heritage, while laying a solid foundation for future historians.

John Hallum was born on January 16, 1833, in Sumner County, Tennessee, the oldest of eleven children of Bluford Hallum and Minerva Davis Hallum. Shortly after he was born, the family moved, and Hallum spent his early years on a farm near Memphis, Tennessee.

He reportedly learned how to read from the local newspaper, the Memphis Appeal, and was a voracious reader from an early age. When the family moved back to Sumner County, he received sporadic schooling in a log schoolhouse, but he supplemented that with home schooling and wide reading. At fifteen, he was offered a scholarship to study for the ministry at Cumberland University. However, Hallum was determined to be a lawyer, so he turned down the offer and instead spent two years at Wirt College, a school located a mile from the family farm. Years later, he recalled that he earned a part of his college expenses by growing tobacco on a three-acre plot of land that his father had given him.

After two years at Wirt, he took a job as a principal of a school near Memphis. In later years, Hallum called his failure to complete his collegiate studies the “mistake of his life,” but at the time, he was intent on pursuing a legal career. While holding a teaching post, he spent his spare moments studying the law.

In 1853, he married Virginia Sneed. The following year, he was admitted to the Tennessee bar, and he soon opened a private practice in Memphis. In the beginning, Hallum’s practice centered on criminal law, but he took great pride in telling acquaintances that an early civil case client was the legendary Sam Houston. He also became a personal and professional associate of Albert Pike.

Hallum soon got involved in politics, campaigning on behalf of Stephen Douglas in 1860. While he opposed secession, his loyalty to the state led him to close his legal practice and join the Confederate army as a lieutenant in 1861. He served on the staff of General Gideon Pillow but was discharged after two years due to a disability caused by extended illness. Upon his discharge, he resumed the practice of law, but, in 1864, he wrote an article for the local newspaper critical of the Union occupying army, and he was arrested and confined for sixty days.

Hallum was in the midst of the chaos that characterized the era of Reconstruction. He served as counsel for controversial Confederate general Nathan Bedford Forrest after his indictment in federal court, but the case did not come to trial. In addition, he was the attorney for, but not a member of, a local secret organization known as the Knights of the Golden Circle. In 1870, Hallum left Memphis for St. Louis, Missouri, where he practiced law until 1874, when he moved to Trinidad, Colorado. His time in Colorado was dominated by contentious litigation dealing with land ownership, and, in 1876, he moved again, this time to Little Rock (Pulaski County), where he would remain for the rest of his life, although his practice, from which he retired around the turn of the century, also took him to Lonoke (Lonoke County), Fort Smith (Sebastian County), and Texarkana (Miller County). Hallum’s life was marked by involvement in various reform efforts, including multiple terms as president of the State Prohibition Alliance of Arkansas.

Hallum’s legal work was complemented by a second career as a historian. He was a popular speaker, best known for a lecture titled, “The Old South,” which, in the post- Reconstruction United States, recalled an era barely recognizable to most listeners. In addition, relying heavily on oral history research, an area in which he was a pioneer, Hallum became a prolific author. He wrote widely, authoring numerous books, including Biographical and Pictorial History of Arkansas (1887), The Diary of an Old Lawyer, or Scenes Behind the Curtain (1895), and his best-known and most critically acclaimed work, Reminiscences of the Civil War (1903). In addition, he also wrote for newspapers and periodicals. He was a member of the staff at the Memphis Appeal when he lived in Memphis and was later a staff contributor to the literary magazine The Inland Monthly. He also contributed articles on a wide range of subjects to assorted other periodicals. His work on the Civil War led to his service as a lecturer and historian for the Historical Committee of the Arkansas Division of the United Confederate Veterans.

Hallum died suddenly on July 11, 1906, after a fall from the steps of a Pine Bluff (Jefferson County) hotel. 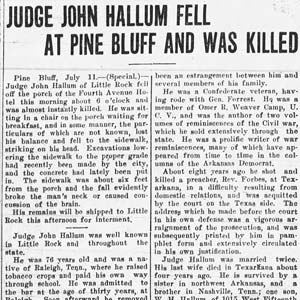