A champion of the modern approach to architectural design, John Gilbert Williams was an architect, landscape architect, and the founding faculty member of the Department of Architecture at the University of Arkansas (UA) in Fayetteville (Washington County).

John G. Williams was born on April 30, 1915, in Van Buren (Crawford County) to Vera Jane Wallace Williams and Charles Bunyan Williams; he had one older brother. He studied engineering at Arkansas Polytechnic College (now Arkansas Tech University) in Russellville (Pope County) before pursuing his bachelor’s degree in architecture from Oklahoma Agricultural and Mechanical College (now Oklahoma State University). After graduating in 1940, he returned to Russellville to teach drawing and math at Arkansas Polytechnic College for two years. While in Russellville, he met Faye Millard of Gravelly (Yell County), and they married on September 6, 1941. They had one daughter.

Williams began his long association with UA in 1946, after a four-year stint teaching at Oklahoma Agricultural and Mechanical College. A growing student body at UA due to the GI Bill and other factors allowed Williams to begin to develop what was to become the Department of Architecture. The accidental inclusion of the curriculum in the 1946–47 academic catalog established the program. Hired as a professor in 1946, Williams served as chairman of the department for the next twenty years. His wife volunteered as the department secretary in the early years, given the lack of paid staff at the time. He continued to teach until his retirement in 1985, and as professor emeritus he maintained his strong connections to UA and to what is now the Fay Jones School of Architecture.

In the 1950s and 1960s, Williams helped bring some of the most important design thinkers of the times, including Eero Saarinen, Charles Eames, and Frank Lloyd Wright, to the university campus. Williams developed a relationship with the internationally recognized architect Edward Durell Stone, who was born in Fayetteville. In the late 1940s and early 1950s, Stone worked on campus projects including the much lauded UA Fine Arts Center. As a result, Stone participated, both formally and informally, in critiquing students of the Department of Architecture through the 1960s. Williams spearheaded the efforts for the Department of Architecture to earn its first full accreditation in 1960.

Williams’s best-known student was Fay Jones, a member of the first graduating class of the program. Williams recognized Jones’s gifts early, giving him his first teaching responsibilities when he was still a third-year architecture student.

Outside of his academic responsibilities, Williams maintained a professional architecture practice. He designed a number of residences, including the Durst House in Fayetteville, designs for which are included in the Library of Congress’s Historic American Building Survey.

In 1984, Williams published The Curious and the Beautiful, which chronicles the development of the architecture school. He received many local and national honors, including the Distinguished Professor Award from the Association of Collegiate Schools of Architecture (1988) and the Pioneer Award from the American Society of Landscape Architects (2002). At the time of his death, Williams was working on book collecting his design lectures and discussing his philosophy.

Williams died from a bone marrow disease on April 11, 2008. He is buried at Van Buren Fairview Cemetery.

Williams, John. The Curious and the Beautiful. Fayetteville: University of Arkansas Press, 1984. 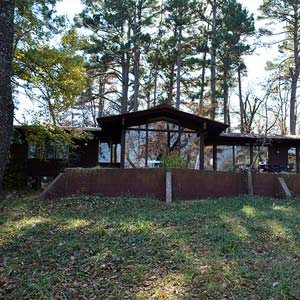