Sometime in mid-November 1888, an African-American man named Jim Smith was lynched in Crittenden County for allegedly approaching an unidentified white woman with an insulting proposal.

According to the November 30 edition of the Arkansas Democrat, which quotes the Memphis Avalanche, word reached Little Rock (Pulaski County) on November 29 that a black man named Jim Smith approached a married white woman on the road and asked her a question. She recognized him and paused to answer him, whereupon they spoke about “the weather and the cotton crop.” She was not suspicious, and answered his question, whereupon he made her “an insulting proposition.” She became angry and began to hurry away, but he followed, threatening her. The woman became increasingly alarmed, as “all avenues of escape seemed closed to her, and she was confronted with a fate worse than death.” As he came nearer, some travelers came down the road and interrupted him. According to the Arkansas Gazette, he offered the woman $10 in gold if she did not report him, and threatened her with death if she did. He then fled into the woods.

When the woman returned home, she told her husband what had happened, and soon the sheriff heard about it and arrested Smith. A deputy was assigned to take Smith to jail in Marion (Crittenden County), the county seat, but the two were intercepted by sixteen mounted and armed men. The men told the deputy to go on to Marion and leave Smith with them. The officer, fearing that resistance was futile, did as they asked. He looked back as he was leaving, however, and “saw the myrmidons of Judge Lynch tying Smith to a tree.” Mob members urged the deputy to continue on to Marion, but as he turned a corner, he heard a number of shots. After the mob dispersed, he saw Smith’s body “literally riddled with bullets.” According to the Gazette, the officer knew no one in the mob and, as he was alone, made no effort to follow them, but reported the matter to the nearest neighbors. There was an inquest, and Smith was buried at the foot of the tree to which he had been tied. According to the Democrat, “The lynching [is] reported to have had the effect of frightening the negroes residing in the vicinity so badly that some of them left the county.” 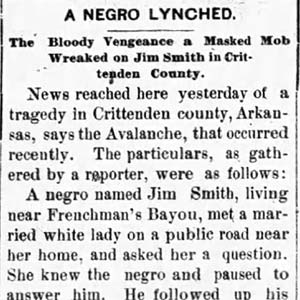