James Jones (some sources refer to him as W. A. Jones) was an African-American choir director lynched near the historic Hinemon University campus on August 22, 1895, in Monticello (Drew County) after being forcibly removed from the Drew County jail by a mob. Jones was accused of murdering Harry Beltshoover of Tillar (Drew and Desha counties) in 1894 but avoided capture by law enforcement for roughly a year while traveling through Arkansas and surrounding states. He was later allegedly involved with the injury of J. R. Bennett of Dermott (Chicot County) during an escape attempt from the Drew County jail on August 17, 1895.

Jones was arrested in Little Rock (Pulaski County) on June 20, 1895, by Sheriff M. A. Simmons and later transported to Drew County to stand trial for the murder of Beltshoover. While at the Drew County jail, he and three other black men imprisoned there—Bill Terrell, Edmond Hughes, and Albert Collins—overpowered the jailor, Walter Wilson, as he was bringing their meal and gained control of his gun. Jones and the other men ran up Bennett Street toward the railroad tracks with two jailors, Wilson and Jack Curry, in pursuit. J. R. Bennett was in a nearby residence on Bennett Street when he saw the commotion and joined the chase.

When Jones reached the railroad tracks, he turned and confronted his pursuers. After a gunfight between Jones and Bennett, Jones was recaptured without being injured. Bennett sustained a nonfatal gunshot wound to his cheek. There was open discussion of lynching but no immediate action. Hughes and Collins escaped, and Terrell was caught and returned to the jail without incident.

On August 22, a mob of around twenty-five masked men broke into the Drew County jail and demanded that Wilson hand over the keys to Jones’s cell. When Wilson told the mob that Sheriff L. E. Morgan had the keys, they sent out three men to get the keys, then changed their minds and decided to force the cell open. After prying the cell door open with hammers and crowbars, they gagged Jones with a piece of rope, took him to a grove of trees near the Hinemon University campus, and hanged him from a limb. A report by the Monticellonian claims that the mob was believed to have come from Tillar to lynch Jones because they thought the jail was insecure. 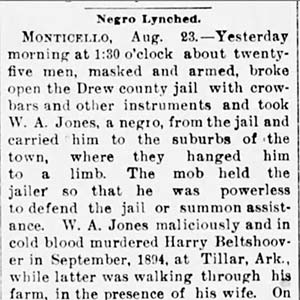