James Arcene, a Cherokee man, was sentenced to death for a crime he committed years before. While aspects of his short life are shrouded in legend, he was known to be sentenced to death after his conviction for a robbery and murder he had committed when he was approximately ten years old, making him, if this story is true, the youngest person on record to have committed a crime for which he later received the death penalty. Arcene’s fellow defendant was William Parchmeal.

James Arcene is believed to have been born in 1862. Virtually nothing is known about his youth.

The basic facts of the crime as established at the trial and afterward were comparatively straightforward, with it being determined that on November 25, 1872, Arcene and Parchmeal came upon Henry Feigel, a man believed to be of either German or Swedish descent, who was making a purchase in a store near Fort Gibson in Indian Territory (present-day Oklahoma). Arcene and Parchmeal followed Feigel as he headed to Fort Gibson, ultimately catching him a few miles from the fort. While their original intent was to rob the man, they in fact shot him multiple times while also crushing his skull with a rock. After dragging the body off to the side of the road, they stole Feigel’s boots and his money, an amount believed to be about $5.00 in today’s dollars.

Arcene initially denied any knowledge of the crime, but once Parchmeal acknowledged his own role—although he at first sought to lay the major responsibility on Arcene—the full story was revealed, with Arcene’s post-trial confession including an admission that he had been the one who fired the gun.

While this aspect of the case appears to be clear, one part of the saga that remains in doubt is when exactly the trial took place. One version says that Arcene and Parchmeal were caught, tried, and convicted shortly after the murder but that before they could be executed, they managed to escape, eluding capture for over decade before they were recaptured and eventually executed. But that was not until after Arcene, seeking leniency, reminded the court that he had been only ten when he was sentenced. While some posit that he may have made that claim in hopes of receiving a lesser sentence, when it was clear that he would not, he made no effort to recant or change his story.

Another version has the crime being unsolved for almost twelve years until 1884. At that point, after conducting his own investigation, U.S. Deputy Marshal Andrews, whose first name is unknown, came to believe that Arcene and Parchmeal were the killers, and, getting a warrant, he was able to make the arrests. They were then tried, found guilty, and sentenced to death. In this version, too, Arcene tried to convince the judge, the famous “Hanging Judge” Isaac Parker, that his age at time of the crime should protect him from execution, but Parker was unmoved, sentencing Arcene to death. The sentence were carried out on June 26, 1885, in Fort Smith (Sebastian County). James Arcene’s resting place is unknown. 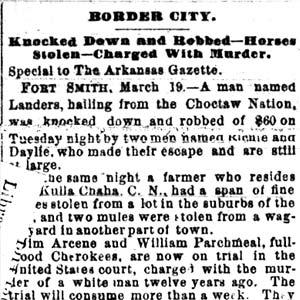 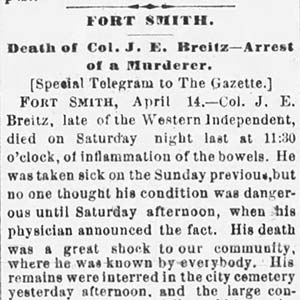