Haygood Seminary in Washington (Hempstead County) was established in 1883 as one of the first schools for African Americans funded by the Colored Methodist Episcopal Church (CME) in Arkansas. Its mission was to prepare preachers and teachers for their vocation so that they could help with the education and development of other African Americans. Haygood Seminary was one of the first five educational institutions in the South supported by the CME Church in the late nineteenth century.

Haygood Seminary, also known as Haygood Academy, was organized in March 1883 by former slave John Williamson in Washington. His former master was the Reverend Samuel Williamson of the Presbyterian Church in Washington. John Williamson was a member of the CME congregation in Washington that was formed in 1867, three years before the official CME denomination was formed in 1870. Through consistent efforts, he pushed for the local congregation to support the new educational institution. The seminary was named after Bishop Atticus Green Haygood, a supporter of black education; president of Emory College in Atlanta, Georgia; and leader in the Methodist Episcopal Church, South.

The school was located on ten acres about one mile southwest of the town of Washington. A large, two-story, wooden frame building was erected on the site and used for classroom space. Henry Bullock, president of the board of trustees during the early years, was a major supporter and labored for the success of the seminary. In the spring of 1894, the first recorded class of three students graduated from the seminary. Their names were Bradley R. Williamson, Oliver Mitchell, and Frank Carter. By the 1890s, the seminary expanded its outreach to include students within the elementary grades. Some of the instrumental principals of the institution during its early years were Professor H. R. Pickney, Josie Beebe, and Ida M. Lane. By 1894, Haygood Seminary had established itself as a prominent educational center for African Americans in the region between Little Rock (Pulaski County), with its Philander Smith College, and Marshall, Texas, with its Texas College nearby in Tyler, Texas. At the time, the property of the school was valued at $5,000.

In the fall of 1894, Rev. George L. Tyus became president of Haygood Seminary. He was a graduate of Paine College in Augusta, Georgia, and was the first African American in southwest Arkansas with an earned degree. During his tenure as president, the campus grew through the acquisition of a seventy-acre farm that provided vocational training and employment for students to pay their way through school. Several buildings were also built during this time. To reinforce the vocational education, a laundry, a blacksmith shop, and an industrial hall were built to train students in different vocations such as millinery, carpentry, brick masonry, and sewing. A girls’ dormitory was also built, which consisted of a two-and-a-half-story building with twelve rooms. The building was named Tyus Hall after President Tyus. There was also a boys’ dormitory on the campus. In 1910, President Tyus resigned his position to become president of Texas College.

Fire destroyed both dormitories and the laundry building on February 8, 1915. By this time, the CME Church in Arkansas felt the need to establish an educational institution in a better location that afforded an increased potential for growth. It found such a spot at Moten (Jefferson County), five miles south of Pine Bluff (Jefferson County), and bought 300 acres of land. The school was named the Arkansas-Haygood Industrial College and was founded in 1915. The first session was held in the fall of 1922.

The Haygood Seminary in Washington continued on and built the last building on the campus in 1921. It was named Williamson’s Hall and consisted of twelve rooms on the second floor and ten rooms on the first floor with a dining room. By 1927, the school had completely relocated to Moten (Jefferson County). The site and buildings in Washington were sold to the Washington Public School District in 1927 for Lincoln High School, which was the black public school in Washington. The last building that remained from the Haygood campus, Williamson’s Hall, was demolished in 1955. The school continued as Arkansas-Haygood Industrial College at its new location in Moten, promoting vocational and educational training for African Americans across the state of Arkansas and the region. It was officially closed by World War II.

Some of the alumni from this seminary were: Dr. M. M. Wilburn, who became a prominent professor at Philander Smith College for over thirty years; Oliver Mitchell, who later became the first pastor of Bullock Temple CME Church in Little Rock; and Randall L. Tyus, son of Rev. George L. Tyus, who served as a field director for the United Negro College Fund and also served in the United States Small Business Administration under President John F. Kennedy. 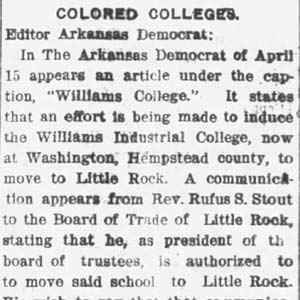