On May 7, 1872, a man named George Cole was shot down by a group of men in Randolph County for having allegedly mistreated his wife, among other infractions. The murder has been included in many lists of lynchings in the state of Arkansas.

The Arkansas Gazette, on May 25, 1872, reprinted correspondence from Pocahontas (Randolph County) describing the victim and details of his murder. According to this correspondent, Cole “was a turbulent man, being nearly always in a neighborhood feud, and usually kept a lot of lewd women about him. He was half Indian blood, had a dark skin, and was a bold, fearless man.” Cole reportedly lived six miles from the state line and was believed to have come originally from Missouri.

On the night of May 7, according to this correspondent, “a party of five or six men” visited Cole at his house “in the extreme northeast corner of the county” and proceeded to ask him “a few questions about mistreating his wife and driving her off,” after which they “shot him down.” He did not die immediately from his wounds but lived a few hours, during which time Cole “charged his wife with being the cause of his murder.”

The deputy sheriff assembled a posse of six men and arrested the following individuals: John McGee, William McGee, George Lumpkins, Ish Boshears, William Atkinson, Thomas Gibson, and Cole’s wife. The correspondent who relayed this information to the Gazette editorialized thusly: “If we had an efficient prosecuting attorney such affairs would be of less frequent occurrence.”

The Gazette reprints a selection from the Pocahontas Express, which relates that as the posse, with prisoners in tow, approached “the farm of Parson Connor, with whom the son of the murdered Cole was making a crop, they discovered the dwelling in which Cole resided in flames.” Suspicion fell upon “the enemies of Cole” who had set the home ablaze while Cole’s wife “had gone for water a short distance from the house.” The house and its contents were entirely destroyed, but no one was discovered in the vicinity.

The number of people bearing the name George Cole on the 1870 census makes determining the exact identity of this individual difficult. Too, this event appears not to have been widely reported. 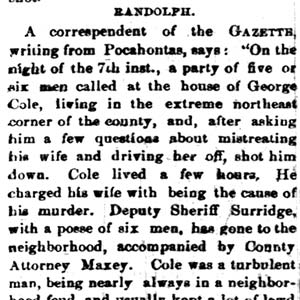