The Flynn-Doran War was an early 1880s struggle for control of gambling in Hot Springs (Garland County) between the gang of Frank “Boss Gambler” Flynn and the forces of rival James K. Lane and his chief hired gun, S. A. Doran.

Frank Flynn arrived in Hot Springs in 1871 and, within five years, effectively controlled gambling in the town, though he also dabbled in newspapers and railroads. James K. Lane, who ran bar operations in one of Flynn’s gambling dens, decided to branch out on his own, opening the Palace Saloon and Club (at which his wife, Gracie, served as madam to its brothel operations), and the Monarch, both on Valley Street, around 1882. Angered by the competition, Flynn and several of his gang trashed the casinos as Hot Springs police officers looked the other way; Lane left town, though his wife continued her operations.

Several Hot Springs businessmen who also hated Flynn raised $6,000 and sent it to Lane to hire someone to either force the Boss Gambler from town or to kill him. In the fall of 1883, Lane went to New Orleans to hire six-foot-three, 220-pound former Confederate major S. A. Doran, who had killed men both during the war and after, to do the job. It was not Doran’s first time in Arkansas: he had previously run a gambling operation in Malvern (Hot Spring County) so corrupt that Governor Augustus Hill Garland sent state militia chief Robert C. Newton to force him to leave the state or face a company of armed militiamen.

Doran, accompanied by Mississippi gamblers and killers Dave and Bob Pruitt, were in Hot Springs by early December 1883 and working on reopening the Palace and Monarch clubs. After failing in an attempt to buy Doran off, Flynn gathered his brothers Billy and Jack and Texas gunmen Hugh Behan, Jimmie Feehan, and “Doc” Nagle to prepare for violence. Doran supplemented the Pruitt brothers with gunsels Harry Lansing, Jake Lucius, Ed Howell, John Allison, and O. R. Ellison.

Though the Palace reopened on December 13, 1883, business immediately dropped off as patrons noticed the number of heavily armed men in the establishment. Four days later, at Flynn’s offer, Flynn and Doran faced off man-to-man on Central Avenue, with Flynn apparently being wounded in an exchange of gunfire. Authorities charged him with disturbing the peace, while Doran and the Pruitts were cited for operating an illegal gambling house.

Flynn then decided to kill Doran and rented a second-floor room at the Arlington Hotel from which he and two associates could shoot Doran down as he approached the hotel, where he ate lunch and dinner every day. Doran became suspicious and did not show up that day, and Flynn and his men were kicked out of the hotel when the manager found the armed men after they refused to let a maid into the room.

Lane’s gambling dens were losing money because customers were afraid of potential shootouts, so he suggested that he and Doran return to New Orleans while Lane transferred title to the Palace to Dave Pruitt, giving Flynn the impression that they were leaving town for good. Flynn, not trusting the scenario, asked a friend in the Crescent City to observe Doran and let him know if he left town. On February 3, 1884, Flynn received a telegram saying that Doran was heading back to Arkansas by train. Though Flynn and his men tried to intercept the former major before he reached Hot Springs, Doran slipped by them.

Six days later, on February 9, Doran sprang his own ambush. Flynn and his brothers, Billy and Jack, left Flynn’s Office Saloon in a closed buggy at around 10:30 a.m., heading down Central Avenue. As they passed the Owl Saloon, Doran and six others opened fire with rifles and shotguns, with four gunmen in the bar’s doorway and three shooting from the second floor.

Jack Flynn was killed with a rifle bullet to the head and a shotgun wound in the chest. Frank Hall, driver of the horse and buggy, was mortally wounded by a shotgun blast. Bystander Bob Hargroves also received a mortal wound, and pedestrian J. H. Craig caught a bullet. Billy Flynn was wounded as he fled after emptying his pistol, but he survived.

Frank Flynn was shot in the thigh, but he fired all of his pistol bullets as he crouched next to the buggy, then reached in and pulled out his Winchester rifle and limped to the stairwell of the nearby Ozark Club. Despite being shot in the hand, he continued to fire on his assailants.

After several minutes of intense gunfire, Hot Springs police chief Tom Toler entered the melee armed with a double-barreled shotgun and threatened to “kill the next man who fires a shot.” He arrested Flynn and Doran and his six henchmen; Billy Flynn was later indicted for his role in the battle. All were later tried on various charges and found not guilty by reason of self-defense. The shootout ultimately led Hot Springs residents to form a militia to run all of the gamblers out of town.

Frank Flynn later moved to Little Rock (Pulaski County), where he ran a gambling room for Angelo Marre (builder of the famed Villa Marre) before dying on October 4, 1910. Doran was killed in a gunfight in the Indian Territory (modern-day Oklahoma) on July 16, 1887. Chief Toler died in the March 16, 1899, Hot Springs shootout between Hot Springs Police Department officers and members of the Garland County Sheriff’s Office. Gambling would continue to thrive in Hot Springs well into the twentieth century. 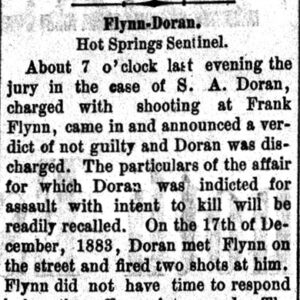