Fishback School was established in 1885 as Washington County School District 68. At that time, the school was about two miles southeast of Springdale (Washington and Benton counties), in an area known for its fruit orchards. Two families, the Grahams and the Boyds, donated one-half acre each from their adjoining orchards as a location for the schoolhouse, a one-room wood-frame building. According to former Fishback student Truman Stamps, the school was named for William Meade Fishback, a prominent Fort Smith (Sebastian County) attorney and legislator who served as governor of Arkansas from 1893 to 1895. As was the case with most rural schools, grades one through eight were offered at Fishback.

By 1915, enrollment at Fishback had grown to the point that a second classroom was needed. This was achieved by hanging a curtain to divide the one room into two. When a fire was built in the pot-bellied stove one cold winter day, the curtain divider, which was hanging dangerously close to the stove, caught on fire. The school building was soon consumed in flames. The teachers and students escaped to safety, but the schoolhouse burned to the ground.

A new two-room wood-frame school building was constructed; it still stands in the twenty-first century. A well was drilled to provide ample water. Another fire in 1947 resulted in only minor damage to the school. Fishback was consolidated into the Springdale School District in 1949, but classes were still held in the two-room school until 1959.

Throughout its existence, Fishback School has also served as a community gathering place. The Victory Home Demonstration Club (later the Victory Extension Homemakers Club) and the Fishback 4-H Club both called the building home. Pie suppers were a common Saturday night event at Fishback, and it served as a local polling place during election years. Today, the building is within the Springdale city limits and is currently home to the Fishback Regular United Baptist Church.

The Fishback School building was placed on the National Register of Historic Places on September 4, 1992. 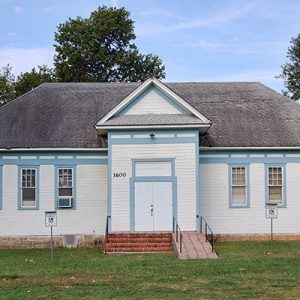