aka: EMOBA
aka: Museum of Black Arkansans and Performing Arts Center

The historic building of First Baptist Church of Little Rock (Pulaski County) is located at the corner of 12th and Louisiana streets just south of downtown. Various congregations of First Baptist worshiped in locations around the city throughout the 1800s. In 1889, First Baptist purchased a new lot and began construction on a large brick church at the historic site of 12th and Louisiana streets. The current building was built on the same site in 1941–42 and was listed on the National Register of Historic Places on June 21, 1994. In 1974, the First Baptist congregation moved to west Little Rock. The buildings on Louisiana remained unused until 1993, when Ernestine (Ernie) Dodson purchased the buildings on Louisiana to create EMOBA (Ernie’s Museum of Black Arkansas). In 2018, Preserve Arkansas listed the First Baptist Church buildings as one of the most endangered historical locations in Arkansas.

The original congregation of First Baptist Church began meeting in the 1820s but splintered soon thereafter and remained inactive until 1858, when a new First Baptist congregation was established by Dr. P. S. G. Watson and the Reverend E. N. Chenault. During the remainder of the nineteenth century, the church moved to different locations throughout Little Rock as it merged and split with other predominately white Baptist congregations in the city. In 1889, First Baptist purchased a new lot and began construction on a large brick church at 12th and Louisiana; it held its first services there in May 1890.

In the first half of the twentieth century, the population of the church grew immensely. The church was renovated in 1925 to make more room for Sunday school attendees. The 1930s saw the largest surges in the church census, averaging over 100 new members per year during the Reverend Arden Blaylock’s time as pastor and reaching 2,350 members by the time of his death in 1937. In 1936, the church purchased an educational building to house even more Sunday school classes and named it after Blaylock. The church was still growing into the end of the decade, ultimately requiring new worship and educational facilities. The current historical church was completed in 1942, by which time almost 3,000 new members had joined the church in the five years since Blaylock’s death.

First Baptist employed the architect A. N. McAninch to design its new church. McAninch was an active and lifelong member of the congregation who had practiced architecture in Little Rock since 1929. He designed the new church in Gothic Revival style, which was popular for religious structures at that time. The M. O. Branton Construction Company was contracted to build the church, which was equipped with enough seating for 1,800 congregants, fifteen Sunday school rooms, a choir room, a center baptistry, and an organ with exterior cathedral chimes. The First Baptist congregation held its first service in the new sandstone building and dedicated it on Sunday, May 3, 1942. On the same day, the Arkansas Gazette published a page acknowledging all the companies that contributed to the construction and furnishing of the building.

Although the congregation continued to grow, many members split from First Baptist to form Gaines Street Baptist Church in 1946. Still, the building at 12th and Louisiana served as the primary center of worship until 1974, when the congregation moved to its present location on Pleasant Valley Drive on the west side of Little Rock. The old buildings on Louisiana remained unused until 1993, when Ernie Dodson purchased them in order to establish the nonprofit organization EMOBA (Ernie’s Museum of Black Arkansas).

The Museum of Black Arkansans was intended to preserve the heritage and culture of black Arkansans by promoting awareness of Arkansas’s black history; creating unity and personal pride within the community, schools, colleges, and universities; and recognizing those black Arkansans who were the first or best in their fields. It was the first black history museum in Arkansas to highlight, through exhibits, the history of African Americans in Arkansas and their contributions to the state.

During its operation, the museum instituted a variety of programs in addition to its regular exhibits. In April 2005, EMOBA received a $10,000 grant from New Futures for Youth, Inc. The museum hosted academic and professional meetings, as well as weddings and receptions. The JamFest Heritage Festival showcased youth talent in sports or on the stage. During this festival, the museum hosted the Sidney Moncrief Sportsmanship and Volunteer Awards Luncheon. During summers, the museum presented the Teens in Action (TIA) summer youth program to develop the creative talent of youth through lecture, discussion, demonstration, performance, and laboratory work. The museum also hosted the Haunted Cathedral each Halloween and entered several award-winning floats in central Arkansas Christmas parades. Plans were made for the historic First Baptist Church to be renovated into a performing arts theater. However, Preserve Arkansas named the building on its 2018 list of the most endangered historical locations in Arkansas, stating that it has endured “deferred maintenance” and has a collapsed portion of the roof.

Lee, Tameka. “The Haunted Cathedral—More Than A Halloween Attraction.” Only in Arkansas, October 25, 2016. http://onlyinark.com/events/haunted-cathedral-halloween-attraction/ (accessed June 5, 2018). 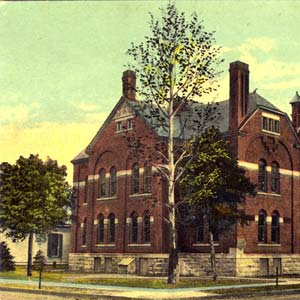