In April 1863, an organization of African-American troops was commenced in the Mississippi River Valley under the personal supervision of the adjutant-general of the army, Lorenzo Thomas. His first regiment was mustered into service on May 1, 1863, as the First Arkansas Volunteers of African Descent, designated the Forty-sixth Regiment U.S. Colored Troops on May 11, 1864. The First Arkansas would be one of four regiments of African Americans that was raised in Helena (Phillips County), a fortified city and naval port on the Mississippi River.

Arkansas would be credited with 5,526 men in six regiments of African descent for Federal service. Allowing African-American men to serve was due in part to the Emancipation Proclamation and the Militia Act of 1862. In the Emancipation Proclamation, President Abraham Lincoln stated, “And I further declare and make known that such persons of suitable condition will be received into the armed service of the United States to garrison forts, positions, stations and other places and to man vessels of all sorts in said service.” The Militia Act of 1862 provided that black soldiers would serve in the Federal service in non-combat support roles with significantly less pay than white soldiers. Up until that point, Congress had decreed that only white male citizens should be enrolled.

In Helena, the First Arkansas Volunteers of African Descent spent its formative days on “standing details” and “fatigue duty with many of the five hundred and fifty-men without shoes and deficient in comfortable clothing.” Colonel William Wood of the First Arkansas expressed his concerns on April 26, 1863, in a letter to Brigadier General Willis Gorman, commander of U.S. forces at Helena: “In consequence of the heavy details for fatigue duty we have lost during the last three days fifty men by desertion and many others are but waiting to run away. Objections to enlisting are made by negroes who but for this heavy fatigue duty would enlist and make good soldiers.…”

On May 6, 1863, despite having improper equipment and little military training, the First Arkansas was ordered to move to Lake Providence, Louisiana. There, they were assigned to the Brigade of U.S. Colored Troops, organized by Brigadier General John P. Hawkins. The First Arkansas arrived on May 10 and, on that same evening, marched to Bayou Macon and drove the enemy away.

On June 7, the regiment moved again, this time to Goodrich’s Landing, where they were assigned to the First Brigade, District of North East Louisiana. On June 29, while on outpost at Mound Plantation, Companies E and G of the First Arkansas were surrounded by Rebel troops estimated at 13,000 men and twenty pieces of artillery. The Confederates were battled-hardened members of the Twelfth, Nineteenth, or Thirtieth Texas Cavalry. After expending all their ammunition and resisting the enemy successfully for six hours, the black soldiers were compelled to surrender. The officers of the First Arkansas were afforded their rights as prisoners of war but were not guaranteed the same for their soldiers. Company E had two officers and seventy enlisted men taken prisoner; twelve men were missing. Company G suffered two officers and fifty-eight enlisted men taken. These men were taken and imprisoned in Louisiana and Texas. Some of the black prisoners of war were able to escape from their Rebel captors and rejoin their regiment, and some were killed in their attempt for freedom. Two from Company E escaped, and eight men were paroled and returned to their company after July 1865. In Company G, five men escaped in 1863, five other men died while in the hands of the enemy after being captured, and two were paroled after July 1865 and returned to their company.

The remaining members of Companies E and G, along with the rest of the regiment, later saw service at Haynes’ Bluff, Mississippi, and skirmished with the enemy in January 1864. They marched to Vicksburg, Mississippi, in April 1864 and engaged in picket and outpost duty at Milliken’s Bend, Louisiana, until November. From December 1864 until February 1865, the regiment was stationed on various steamers to New Orleans, Louisiana. In May 1865, the regiment was moved to Brownsville, Texas, where it served until mustered out on January 30, 1866. During its history, 1,213 men and officers served in the Forty-sixth Regiment U.S. Colored Infantry, and 306 men died in the line of duty. 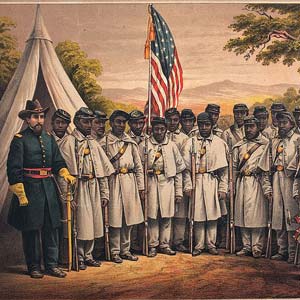