The Farkleberry Follies were a popular musical and theatrical stage show that spoofed politicians and other newsmakers. The show was performed every other year for more than thirty years in the late twentieth century. Journalists and other media professionals produced, directed, and acted in the show, which was staged for part of a week each spring in odd-numbered years, when the Arkansas General Assembly was in session. Legislators were the objects of parodies in nearly every show.

The Arkansas Chapter of the Society of Professional Journalists, which was chartered in 1961, began the Follies as a way to raise money for college scholarships for aspiring journalists. The seventeen shows—they began in 1967 and ended in 1999—produced more than $125,000 for scholarships.

The first Follies—which lampooned the Governor Winthrop Rockefeller, his opponents, and his predecessor, Orval E. Faubus—were an enormous hit. Thereafter, nearly every performance was sold out, and tickets became hard to get. Public officials and other newsmakers who were parodied usually got front-row seats at a performance. The shows were staged at the Olde West Dinner Theatre in southwestern Little Rock (Pulaski County), which later became Murry’s Dinner Playhouse. The theater was operated by Ike Murry, a politician of the 1940s and 1950s who was attorney general (1949–1953) and ran for governor in 1952.

Farkleberry is the common name for a tree species (Vaccinium arboreum) in the Ozark Mountains that became associated with Faubus, owing mainly to political cartoonist George Fisher. Faubus reputedly stopped a state highway crew working near his home clearing weeds and underbrush for a Franklin County road-improvement project. He identified trees that he wanted left standing for their ornamental value. A state employee wrote an article about it in a departmental publication and published a picture of Faubus with an axe. Fisher, who drew cartoons for the Arkansas Gazette, inserted the farkleberry tree in the list of trees Faubus was saving. Afterward, his cartoons of Faubus often showed a leafless farkleberry tree.

Fisher had a significant role in formulating, producing, and performing in the show, which took the name of the Faubus icon. Fisher usually began the show by caricaturing a few of the figures who would be lampooned.

The Follies were the creation of Bill Lewis, a Gazette reporter who had been part of a gridiron show in Baton Rouge, Louisiana, when he was with the United Press bureau there. Lewis was president of Sigma Delta Chi, which was struggling to find money for its projects, including journalism scholarships. He assembled a group, including Fisher, at his home, where he proposed a gridiron show satirizing politicians. Fisher came up with the title, Farkleberry Follies. Leroy Donald, an editor at the Gazette and later a business writer for the Arkansas Democrat-Gazette, took over the brainstorming and produced most of the shows. He rewrote the scripts of others (“funnying them up,” as he described it), and directed the performances.

The sitting governor, who was always lampooned, attended every show, with one exception. In 1999, Governor Mike Huckabee, believing he would not be treated favorably in the satire, did not attend. The Follies ended with that performance. Donald, in failing health in 2000, said he could not run another show, and neither the Society of Professional Journalists nor any of the participants wanted to assume his role. 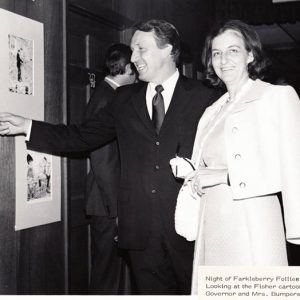