Elias Hensen was seized from a house and shot to death on March 12, 1879, in Clay County after testifying against a co-defendant in a horse-stealing case and preparing to testify against other members of his gang.

The 1870 federal census lists Elias Hensen, born around 1852, as an illiterate farmhand working for Abraham Roberts in Randolph County’s Current River Township, and it indicates that he might have had a diminished mental capacity. By 1879, he apparently was working with the Montgomery Brothers gang and had earned a reputation as a “rather unsavory character in this neighborhood, and was accused of various thefts, horse-stealing among them,” according to the Clay County Courier.

Hensen and an accomplice, Charley Jenkins, were arrested in early 1879 and bound over for trial at Boydsville (Clay County) and Gainesville (Greene County). Hensen turned state’s evidence and testified against Jenkins, resulting in the latter receiving a conviction and a three-year prison sentence. Hensen was freed and ordered to testify against other members of the gang at the next term of the circuit court. However, as the Courier noted, “he thought he saved his own bacon; but it turned out to be only for a little while.”

Hensen stopped at the home of a “Widow Meeks” on the night of March 12, 1879, to spend the night. The Courier reported the home as “situated between Black and Cache river bottoms”; the 1870 federal census shows no one named Meeks in Clay County, though there is a woman named E. C. Meeks listed as head of household in Randolph County’s Current River Township just west of the river bottoms. A group of “armed and disguised men” showed up at Meeks’s house and seized Hensen, and “putting a rope around his neck, [they] took him out and shot him to death in a most brutal manner.” The Memphis Daily Appeal also reported on Hensen’s murder, though it misnamed him as James Henson, and the Arkansas Democrat simply stated that “Elias Henson is the name of Judge Lynch’s latest victim in Clay County.”

The Courier noted that a Judge Gilbert was to hold an inquest on Hensen’s death, and the inquest apparently developed Bud and Milt Montgomery as prime suspects. On May 17, 1879, Clay County sheriff J. A. McNeill gathered a posse and set out in pursuit of the brothers. They found them at their brother-in-law’s home about five miles west of Corning (Clay County) the next morning. Sheriff McNeil captured Bud Montgomery, but his brother opened fire on another posse member, causing a third man to fire “a couple of charges of buckshot into the rascal’s carcass. He now lies at the point of death, his body literally perforated with the little leaden pellets,” according to the Corning Courier. Bud Montgomery was taken to the jail in Boydsville.

The newspaper stated that “these fellows are supposed to be the murderers of Elias Hensen, who was taken out of the Widow Meek’s [sic] house and shot to death in a most brutal manner a few weeks ago.” McNeill received praise for his role in “ridding [Clay County] of the gang of murderous assassins and robbers who for months have proved a terror to the law-abiding citizens of south Missouri, as well as north Arkansas.” The paper stated that the Montgomerys “stand a good chance never to see light outside the bars again.…Their race is run.” 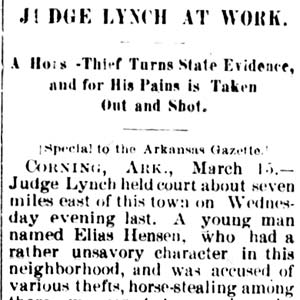