The Duggars are an Arkansas family who became famous on the TLC network show 19 Kids and Counting. The family is known for its strict adherence to the Baptist faith and conservative values, which include restrictions against any birth control methods. However, the Duggars have been criticized by those who believe that such large families are not healthy for children and those who oppose their anti-contraceptive activism. On May 22, 2015, TLC announced that they were pulling all episodes of 19 Kids and Counting after Josh Duggar, the eldest child of Jim Bob and Michelle Duggar, admitted publicly that he had engaged in acts of child molestation as a teenager; the show was officially canceled later that year. However, certain of the Duggar family members have been featured in the follow-up series Counting On.

Jim Bob Duggar was born on July 18, 1965, and Michelle Ruark was born on September 13, 1966. They married on July 21, 1984. Both of them are real estate agents, and Jim Bob Duggar served two terms as an Arkansas state legislator (from 1998 to 2003). The Duggars reside in Tontitown (Washington County) in northwestern Arkansas.

The Duggars have often explained why they chose to have a large family. Initially, Michelle used birth control pills, but between her first and second children, she became pregnant while on birth control, and the pregnancy ended in a miscarriage. The couple felt that their use of birth control had caused them to lose the baby, and so they decided that they would no longer use it; in their words, they would “let God decide how many children we would have.”

Jim Bob Duggar ran for U.S. Senate in 2002. Although he lost the race, the Duggars credit the beginning of their celebrity to this event. A picture taken of the family at the polls appeared in the New York Times, which led to interviews and articles in Ladies’ Home Journal and Parents Magazine, which in turn led to a documentary on Discovery Health Channel. The documentary was called 14 Kids and Pregnant Again! The Duggars agreed to take part in the project when they were promised that their faith would be highlighted. The first episode of what was then called 17 Kids and Counting aired on September 29, 2008, on TLC and featured the family traveling to New York to appear on a talk show and announce Michelle’s pregnancy with their eighteenth child.

The oldest child, Josh, married Anna Keller in September 2008; their children all have names that begin with the letter “M.” Although they moved to Washington DC, where Josh originally worked for the political action committee of the Family Research Council, they still appeared on 19 Kids and Counting until the show was suspended, whereupon they returned to Arkansas. Jill married Derick Dillard on June 21, 2014, and they began a family. Jessa married Ben Seewald on November 1, 2014, and they began a family. Jinger married Jeremy Vuolo, a former professional soccer player, on November 5, 2016, and the couple had their first child in 2018. Joy-Anna married Austin Forsyth on May 26, 2017, and the couple’s first child was born in 2018. Joseph married Kendra Caldwell on September 8, 2017, and the couple’s first child was born in 2018. Josiah married Lauren Swanson on June 30, 2018. John-David married Abbie Burnett on November 3, 2018, and their first child was born in January 2020. Justin married Claire Spivey on February 26, 2021. Jedidiah married Katelyn Nakatsu on April 3, 2021.

The Duggars do not watch television, and the children’s Internet usage was closely monitored by the parents. The family is also known for following the tradition of courtship instead of dating. They involve prayers and hymns as part of their daily life, and they consider themselves Independent Baptists, which means that they do not belong to any specific branch of the Baptist faith.

Family members work as spokespeople with the Financial Freedom Seminar. They credit their financial stability to their ability to budget and save money, but they also rent out commercial properties for income, and their various public appearances generate income. It is estimated that the Duggars made at least $25,000 per episode of the original show. Multiple family members have established limited liability corporations (LLCs) used for investing in real estate. Some of the family’s transactions have attracted tabloid attention. For example, Jim Bob Duggar bought a home in 2016 for $325,000, sold it to Soli Deo Gloria, Anna Duggar’s LLC, in 2019 for $257,078, and then she subsequently put it on the market for $799,000. Jim Bob Duggar and his family are also members of the controversial Institute in Basic Life Principles, founded by minister Bill Gothard.

Both the show and the family have received criticism from the public. On their blog, Josh and Anna wrote, “Being in the public eye, people often disagree with our beliefs or the way we have chosen to live our lives. Our goal in life is to share of the hope that we have in Christ and to use whatever platform He has given us to do so.” When asked if having a large family was harmful because of overpopulation, Michelle Duggar replied that she does not feel overpopulation is a problem.

Another controversy relates to the health of the children. The nineteenth child, Josie, was born prematurely and weighed only one pound and six ounces. Michelle was suffering from a rare complication of pregnancy in which her blood pressure was too high, and Josie had to be delivered via emergency C-section. In 2011, Michelle suffered a miscarriage but announced that she was still hoping to have more children. In 2014, Michelle and Jim Bob were shown on their TLC show visiting a Little Rock (Pulaski County) OB-GYN who specializes in high-risk pregnancies to investigate whether Michelle could have any more children.

Michelle and Jim Bob Duggar have released two books: The Duggars: 20 and Counting! (2008) and A Love that Multiplies (2011). Older daughters Jana, Jill, Jinger, and Jessica released their own book, Growing Up Duggar: It’s All about Relationships (2013), in which the sisters wrote about their relationship with God, family, friends, and significant others, as well as self-acceptance and the trials of adolescence.

The family also became politically active, having spoken out against pro-choice organizations such as Planned Parenthood. In the 2012 U.S. presidential race, they supported Republican candidate Rick Santorum. They filmed a short campaign video called 19 Reasons & Counting to Vote for Rick Santorum, in which they praised the candidate for his family values and conservative stance. In addition, Michelle Duggar participated in the successful campaign to repeal a Fayetteville (Washington County) city ordinance that would have protected people from discrimination in housing, employment, and public accommodations on the basis of sexual orientation.

In May 2015, In Touch magazine reported on the existence of a police report into allegations of child molestation by Josh Duggar when he was fourteen years old. An anonymous tipster had contacted Oprah Winfrey’s production company, Harpo Studios, with information on the allegations shortly before the Duggar family was to appear on Oprah in 2006, leading to the cancellation of the episode and the initiation of a police investigation into the charges. Police later dropped the investigation as the statute of limitations for the alleged 2002 incidents, involving five girls (including four of his sisters), had passed. After the In Touch exposé, copies of the Springdale (Washington and Benton counties) police report began circulating widely online. On May 21, 2015, Josh Duggar admitted the validity of reports and resigned his position with the Family Research Council; he and his wife moved back to Arkansas shortly thereafter. Subsequently, TLC suspended its broadcast of the Duggar family’s show, officially announcing its cancellation on July 16, 2015. On August 19, 2015, Josh Duggar was revealed to have an account with Ashley Madison, a website for people seeking extramarital affairs. The next day, he released a public statement acknowledging a “double life” that included marital infidelity and the viewing of pornography. Shortly thereafter, Josh Duggar checked himself into a rehabilitation clinic and has since remained out of the public eye, even after returning to Arkansas in March 2016. In November 2015, adult film actress and model Ashley Stamm-Northup (a.k.a. Danica Dillon) filed suit against him alleging that he assaulted her violently during a sexual encounter in Philadelphia; however, the case was later dismissed.

The following month, two of the sisters he molested appeared in the three-part TLC special Jill and Jess: Counting On, which chronicles their own lives. The second season of Counting On began airing in August 2016 and focused upon Jinger and her engagement to a professional soccer player, and the series has continued to the present day. In May 2017, it was revealed that the four sisters molested by Josh Duggar had filed a lawsuit against the City of Springdale, Washington County, and In Touch for beach of privacy. Most of this lawsuit was dismissed in October 2017. Josh Duggar himself filed a federal lawsuit claiming damages for the release of the records, but this was dismissed, and appeals went nowhere; he then filed a lawsuit claiming invasion of privacy, but a circuit court dismissed the charges, and the Arkansas Court of Appeals and the Arkansas Supreme Court upheld the dismissal in 2020.

In 2017, Jill and Derick Dillard announced that they were leaving the series Counting On. Since then, they have elaborated more upon their separation from the larger Duggar family, noting that their careers had encountered roadblocks due to the dictates of the family and the television network. Derick has even suggested on social media that Jim Bob Duggar negotiated contracts with TLC without involving any of his adult children and made himself the beneficiary of their paychecks. Moreover, Jill has moved away from the practices of her parents by getting a nose ring, wearing jeans, admitting to the consumption of an occasional alcoholic beverage, and not visiting the family compound for years.

Duggar, Michelle, and Jim Bob Duggar. A Love that Multiplies: An Up-Close View of How They Make It Work. New York: Howard Books, 2011. 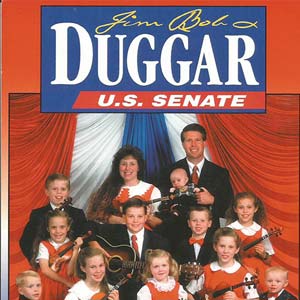