Donald W. West was a farmer, educator, writer, and folklorist who became a local legend in northwestern Arkansas, especially Fayetteville (Washington County). West moved with his family to the thickly forested mountains, abandoned farmland, and isolated hollows of southern Washington County near Winslow (Washington County) in 1938. He published a memoir about his family’s subsistence farming experience and worked as itinerant teacher. (A different Don West was also a writer and proponent of folk culture and rural life who co-founded the Highlander Folk School in Monteagle, Tennessee, in 1932.)

Don West was born in Oklahoma on September 12, 1905, the fourth of five children of John West and Mollie West. West was a resident of Garrett, Oklahoma, and Santa Fe, New Mexico, before moving to Arkansas, where he lived in Fayetteville and other areas of Washington and Madison counties over the span of six decades. He attended Southeastern State Teachers College (now Southeastern Oklahoma State University) in Durant, Oklahoma. After college, he taught at the Trent Creek School in Lockesburg (Sevier County).

West migrated to New Mexico to work with his brother, Harold (Hal), who was employed making men’s ties and other products out of wool. West later worked at the University of New Mexico Museum as a cataloging assistant, handling pottery and other artifacts; he enrolled there in 1934 to study archaeology. The brothers associated with bohemian and politically engaged artists in New Mexico, and Hal was a central figure in the Santa Fe art movement. Don met his future wife, Muriel Leitzell, through those social connections. A graduate of the University of Wisconsin trained as a sculptor, Leitzell was an active writer and artist seeking medical treatment and creative opportunity in New Mexico.

Soon after marrying, the Wests had two children: daughter Petra and son Timothy. West and his family left an artist community in Santa Fe looking for somewhere they could begin subsistence farming. Attracted by the possibility of returning “back to the land” to become farmers, the Wests selected Arkansas based on a friend’s recommendation of the cheap land available there. In 1938, they purchased a nine-acre farm from Millard Pierce near Brentwood (Washington County), north of Winslow, along Sinclair Creek near the present-day intersection of Sunset Road and U.S. Highway 71. The purchase was made by trading their car plus an additional $500.

The Wests named their homestead “Frogbog.” After a year, the Wests purchased more land on Starr Mountain in Winslow and moved their family. They continued to raise chickens and cows while gardening for food and attempting to establish a produce operation. The Wests both remained active artists engaged in printmaking, painting, and sculpture. Muriel, who struggled with health problems, found some success raising chickens and selling eggs at the local market in Winslow. The Wests made their living on two pieces of land for a little more than a decade and established connections with the arts community in nearby Fayetteville, developing friendships with local folk arts practitioners in the Ozarks and emerging collectors of folk culture.

In 1946, Don West published a narrative account of his family’s Ozark “back-to-the-land” adventure, Broadside to the Sun. The work was published by W. W. Norton & Co. as part of its “American Lives” series; it had a large printing of several thousand copies and was reviewed in journals both in Arkansas and around the United States. Although partly fictionalized, the book remains a valuable entry into the “country life” genre of mid-twentieth-century American prose, offering an intimate portrait of Winslow and the western Arkansas Ozarks during the later years of the Great Depression. Hal West contributed the woodcut engravings for the book’s illustrations.

In Fayetteville, the Wests took part in writing groups and published poems and short stories. They became acquainted with University of Arkansas (UA) faculty such as Walter J. Lemke and Ed Albin. Don West became involved with the Arkansas Folklore Project at the University of Arkansas, directed by Mary Celestia Parler. Many of the people recorded by West were interviewed for the Arkansas Folklore Project conducted by Parler and her students. West also contributed to campus literary projects. His short story “Corn Widow” appeared in the 1954 issue of Preview, the student literary journal of the College of Arts and Sciences. He and Muriel separated while in Fayetteville, and he relocated to Eureka Springs (Carroll County), where he was involved with an artist’s colony. Muriel completed her MA in English in 1953 at the University of Arkansas, followed by a PhD in 1957, before moving to pursue teaching positions. Don West later taught in Huntsville (Madison County) and Alaska, before returning to Fayetteville permanently.

West’s last home was in Hillcrest Towers in Fayetteville. His son returned to live on the family’s land in Winslow and continue work as an artist in the 1970s. West died in Fayetteville on August 30, 1993.

For additional information:
Neal, Joe. “Broadside to the Sun: A Shared Dream of an Independent Life.” Grapevine, December 1, 1976.

Folklore and Folklife
Literature and Authors
World War II through the Faubus Era, 1941 through 1967 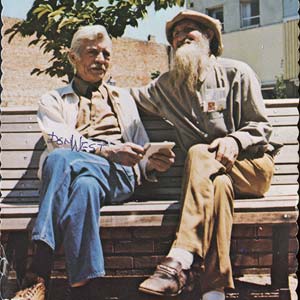