Dan Hogan was a socialist activist in Arkansas. A lawyer and journalist, Hogan embodied “witty and intellectual” socialism, and he spent a lifetime pursuing social justice, beginning with the Populists in the 1890s and culminating with the socialist movement in Oklahoma, where he spent his final years. His daughter, journalist and activist Freda Hogan Ameringer, carried on his efforts.

Dan Hogan was born in 1871. His father, Daniel Hogan, was a Fort Smith (Sebastian County) machinist who had emigrated from Ireland and then served in the Confederate army, while his mother, Alice Hogan, was an Arkansas native. Hogan’s father abandoned the family, and Alice Hogan was granted a divorce and full custody of their three children in 1885.

Dan Hogan was educated in the local area, pursuing law and journalism. He first got involved with populism in the 1890s, publishing a paper in Mansfield (Sebastian and Scott counties) in support of the Farmers’ Alliance. However, according to his daughter, he moved more to the left and into the Socialist Party camp after providing legal representation to some local coal miners who sought to unionize the mines. Hogan believed that socialism was a battle against banks, corporations, and other concentrations of economic power. Such an interpretation could be easily reconciled with the small-business journalism and legal practice that characterized Hogan’s professional life, as well as his longtime efforts on behalf of miners, including his defense of many involved in the 1914 Sebastian County Union War.

Hogan published a number of newspapers, including the Southern Worker, which was founded in 1901 out of Huntington (Sebastian County) and was the state’s first socialist periodical. He also published the Huntington Herald and the Huntington Hummer, both of which had a socialist editorial bent. As a result of these efforts, the operational, if not the official, headquarters of the Arkansas Socialist Party effort were in Huntington.

Hogan served as the secretary of the Arkansas Socialist Party organization from 1906 to 1910. In addition, throughout this period, Hogan was making a name for himself on the socialist lecture circuit. Party standard bearer Eugene Debs praised Hogan’s efforts, saying that he was at his best in the public arena.

Hogan regularly ran for office under the Socialist Party label, and while he never experienced much electoral success, he sought to appeal to the farmers and laborers who struggled in the challenging Arkansas economy. His first foray into the electoral arena was in 1906 when he was the Socialist Party’s candidate for governor. He garnered just under 3,000 votes. In 1910, Hogan was again the party’s candidate for governor, receiving 9,196 votes. In September of that year, Hogan reaffirmed his journalistic commitment to the socialist cause announcing that, henceforth, the Herald would be a “constant and fearless advocate of Unionism and Socialism and support the interest of every other class.”

Hogan became increasingly involved with the Socialist Party’s national efforts. Beginning in 1908, he began to represent Arkansas on the National Council, and he joined the party’s executive committee in 1912. In addition, Hogan was a delegate to the party’s 1908 and 1912 national conventions. In 1912, he was the preferred choice of the party’s left wing for vice president. While he had substantive support, the nomination went instead to Emil Seidel, the mayor of Milwaukee, Wisconsin.

In 1914, Hogan was again the socialist candidate for governor, and he received just under 10,500 votes. After the election, he continued his activism. He opposed U.S. entry into World War I, and as a member of Socialist Party’s Committee on War and Militarism, he signed the July 1917 St. Louis resolution, which condemned the American declaration of war as a crime against the nation’s people. As the war unfolded, his opposition waned, especially after President Woodrow Wilson’s “Fourteen Points” speech highlighted self-determination as a goal. However, passage of the Sedition Act and the subsequent prosecution of numerous socialists, including Debs, for simply speaking out against the war revived his opposition to the war.

Around 1917, seeing limits on what he could accomplish in Arkansas, the patriarch of what Eugene Debs affectionately termed the “House of Hogan” moved to Oklahoma, believing that it would be more receptive to the cause as well as offer greater business and publishing opportunities. His daughter, Freda, a frequent companion in his travels, had already moved there on doctor’s orders due to concerns about a developing case of tuberculosis.

While his wife, Charlotte (Lottie) Yowell Hogan, had major health problems and was an invalid for much of the 1890s and the early 1900s, his daughter Freda, the oldest of his four children, became an active member of the socialist ranks. Working with Oscar Ameringer, whom Freda would ultimately marry, they developed the Oklahoma Socialist Party into one of the strongest statewide socialist organizations in the country. Dan Hogan and Oscar Ameringer founded the Oklahoma Daily Leader, an anti-war socialist paper. Then, in April 1932, Hogan and Ameringer, who by then also jointly owned the Oklahoma City paper The Leader Press, founded the Law Journal Publishing Company and acquired the Oklahoma Citizen, which they renamed the Daily Law Journal.

Dan Hogan was living in Oklahoma City when he died in 1935. 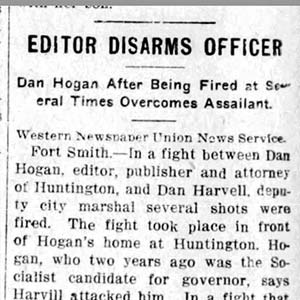 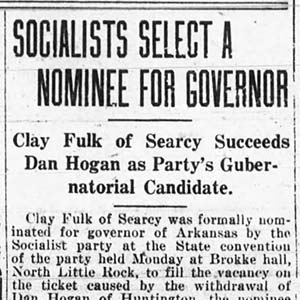