The Cove Creek Tributary Bridge is a filled-spandrel cut-stone masonry arch bridge crossing a tributary of Cove Creek on Arkansas Highway 309 about 8.5 miles southeast of Paris (Logan County). It was built in 1936 under the auspices of the Works Progress Administration (WPA), a Depression-era federal relief agency, as part of a project to develop Mount Magazine.

Completed in 1936, the Cove Creek Tributary Bridge is twenty-three feet long with a twenty-nine-foot-wide concrete deck travel surface covered with asphalt in a thirty-two-foot-wide roadbed. It is supported by two stone masonry barrel-vaulted arches, each eleven feet wide. A concrete date stone located in the east spandrel wall is engraved with “USRA 1936.” A solid concrete barrier with a steel guard rail was added to both sides of the deck at some time after the bridge’s construction.

Construction of the road later designated as Highway 309 and its associated bridges was an important part of the $1,578,000 project to develop Mount Magazine as a recreational site. The project, which ultimately involved around 2,500 WPA and USRA workers under the direction of V. D. Hill of Paris, was effectively completed in 1938 with construction of the Cove Lake Spillway Dam/Bridge.

The Cove Creek Tributary Bridge was listed on the National Register of Historic Places on May 26, 1995. 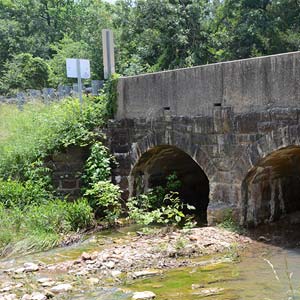 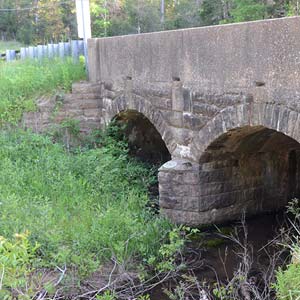