In the spring of 1888, the coal mining operations in Johnson County, worked by convict leased labor, were the focus of an investigation by the state of Arkansas for reported cases of brutality. The investigation led to a reevaluation of the convict lease system and its eventual abolishment several years later.

During the years immediately following the Civil War, Arkansas developed a growing prison population and acquired the financial problems associated with such growth. Governor Isaac Murphy proposed instituting the practice of leasing convicts to assist in solving this problem. In 1867, the state established the convict lease system. The company of Hodges, Peay and Ayliff contracted with the state at the rate of thirty-five cents a day to provide work at the state penitentiary at Little Rock (Pulaski County). The success of the program resulted in other companies seeking leases. Most convict work continued to be completed within the walls of the state prison; however, in 1873, the system was revised. Under this revision, convicts would be leased to a single lessee, some outside the walls of the state prison, for a period of ten years, with the lessee being required to provide all necessary items for the health and safety of the prisoners. The state was completely free of any prisoner expense. Regulation of the system would be overseen by a three-man penitentiary board headed by the governor.

Under this revision, John M. Peck and silent partner Zebulon Ward obtained the lease of state convicts for ten years. In 1883, the lease contract was obtained by J. P. Townshend and L. A. Fitzpatrick. With the addition of partner Met L. Jones, the group created the Arkansas Industrial Company (AIC).

Many convicts continued to work within the walls of the state prison, but hundreds were now being subcontracted to work in locations throughout the state. One of those locations was in the coal mines operated by the Quita Coal Company in Johnson County.

By the early 1880s, Coal Hill (Johnson County) was being hailed as the “coal center of the west,” and company officials were seeking cheaper and cheaper labor. The Quita Coal Company executives contracted with the AIC for the lease of approximately 100 convicts. The transaction proved profitable for both companies. However, by early 1883, rumors began to circulate about the conditions and discipline being applied to the convicts in the coal mines. Another three years passed before any significant inquiry was conducted in the mines. In 1886, a group of citizens filed a petition with the state concerning the mistreatment of prisoners. Interestingly, among their complaints was that the convicts were being worked on Sunday. An investigation conducted by the state determined that convicts were subjected to poor health conditions, worked under harsh conditions, and were subjected to brutal punishments. The commission headed by Governor Simon Hughes recognized these failures in the system and initiated a number of changes, including requirements for a hospital and doctor, proper sleeping quarters, and a maximum ten-hour workday with Sundays off.

Additional reports of regulation violation continued to circulate, and in 1888 Johnson County coroner E. E. Blythe attempted to enter the camp to investigate reports of suspicious deaths of some convicts. After being initially denied entry, he was allowed to inspect the camp. His inspection uncovered the violent death of two convicts. Blythe discovered that convict Charles Williams was beaten to death by Warden J. A. Gafford. In the second death, Moses Harvey had been forced to fight another convict until he was killed. Blythe delivered his findings to the penitentiary board in Little Rock, who ruled that an official state investigation was necessary.

In March, a group of investigators led by Governor Hughes visited the Coal Hill camp. Upon a complete examination, they determined that the camp was in a disgraceful condition. The more than 100 convicts were poorly housed and provided inadequate healthcare, clothing, and food. Many acts of brutality were determined to have caused at least four convict deaths. As a result of these and other abuses, the convicts were returned to the penitentiary in Little Rock by the end of the month in what the newspapers described as a “state of rags and filth.”

The investigation determined that the AIC was guilty of violating the rules and regulations specified in their lease contract. The Quita Coal Company was held responsible more directly for the horrible conditions existing in the mining camps. Little action was taken by the state, however, other than the removal of the convicts from the control of the AIC and the Quita Coal Company mines. Still, the state continued to lease convicts to private contractors.

The exposure of the abuses in the convict lease system at the Coal Hill mines did not bring an immediate end to the system. Abuse of convicts continued to be reported in the state press. Not until 1909 was there a call by the governor, George Donaghey, to end the system completely. In 1912, under his direction, the system was effectively abolished. 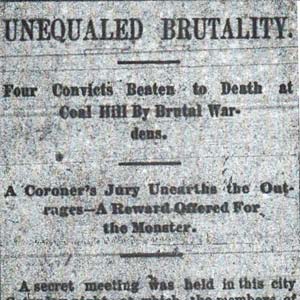 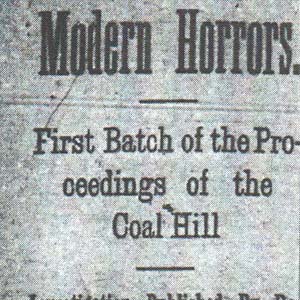 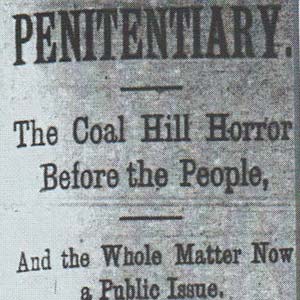 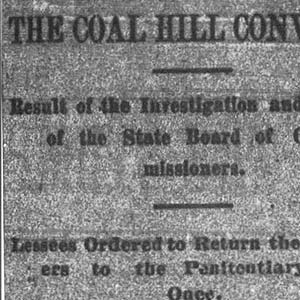