Cleveland, located in northern Conway County between the East and West forks of Point Remove Creek, was once a thriving center of area trade. Little remains of the farming town that once numbered over 300. The surrounding landscape that was previously planted in cotton is now dominated by sheep, beef cattle, and chicken houses.

The first white settler to occupy part of the one-square-mile plot of land on which Cleveland was founded is believed to have been James T. Massey, who arrived in 1871. Though others gradually moved to the area, the town did not develop for several years. The first store was established in 1883 by John W. Todd and T. J. Hannaford. Todd had settled in the area about 1877. The post office in nearby Rondo (Cleveland County) serviced the area until it was moved to Cleveland in 1888. By 1890, the town, with a population of 303, consisted of six mercantile stores, a drugstore, a blacksmith shop, a two-story hotel, a boarding house, a steam sawmill, a planing mill, a grist mill, and three doctors. That same year, a group of twenty-three citizens petitioned for incorporation, which was granted on April 11, 1890. One source in 1891 described Cleveland as “new and rapidly growing.” The name Cleveland was said to have been chosen because many area settlers had received homestead certificates signed by President Grover Cleveland. While farming was the main occupation, some area residents were engaged in a profitable timber business.

School-age children attended the several one-room schools in the area until a larger school was established in Cleveland in 1880 for grades one through six. In 1888, a high school was added. The Depression hit the community hard, and the school was closed in 1933 with students being sent to nearby Wonderview (Conway County). Shortly afterward, the Wonderview school burned, and the students were temporarily returned to Cleveland. High school students were later sent back to Wonderview. Grades one through six remained until they too were consolidated in 1959.

In the early twentieth century, a town band and amateur theatrical troupe traveled around the county performing. In the 1890s, Cleveland was home to its own telephone company: the Morrilton, Solgohacia and Cleveland Telephone Line. On many Saturdays, residents used the phone’s party line system to listen to music played by local entertainers. The phone company went out of business by the 1920s, and the community went without service until Southwestern Bell reestablished it in 1962.

The town’s population never officially numbered more than 303 citizens, as recorded in the 1890 census. Instead, it experienced a steady decline and has not numbered more than 100 since 1930. Paved highways and better transportation made it possible for people to drive to larger towns for their needs. In 1976, the Cleveland Fire Department District 6 was established, and a new station was opened in 2003. In 1949, the last cotton was ginned in town, and the sawmill was closed in 1965. By the 1940s and 1950s, people began to turn to raising broiler chickens. By the 1990s, there were some fifty chicken houses in the area producing some 6 million broilers a year. Beef cattle and sheep are also raised in sizable numbers.

As of 2010, little remains of the once prosperous farming town other than a few homes. The nearby Ozark National Forest attracts tourists to the area. 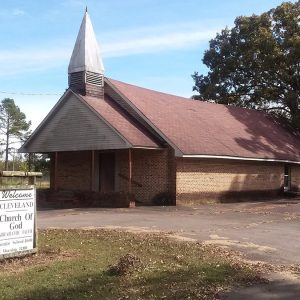 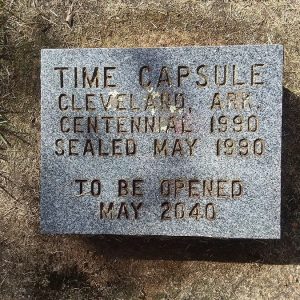