The Captain John T. Burkett House is a Folk Victorian–style home located near Frenchport (Ouachita County). Constructed around 1900, the house was added to the National Register of Historic Places on June 3, 1998.

Little is known about John Burkett’s early life. Some sources give his birth year as 1868 in Louisiana. He did operate a steamboat for a time on the Ouachita and Mississippi rivers, leading to the honorific title “Captain.” Burkett married Sula Jones on October 8, 1893. Sula was the daughter of Henry and Hattie Jones. Henry Jones served as a justice of the peace in Ouachita County and owned a 700-acre cotton farm. Receiving land from Henry Jones as part of a dowry, Burkett built the home on the property. The central portion of the home was designed by William Harkey.

The house is a one-and-a-half-story structure facing west. The house is constructed on brick piers with additional masonry work between the piers. Originally topped with cypress shingles, the house was later re-covered with composition shingles. Three chimneys are present, with one on either side of the home and a third in the rear.

The front of the house includes a wraparound porch that extends to both the north and south sides. The porch is topped with a hipped roof supported by eight concrete piers and eight columns. A centrally located single-leaf door leads into the interior of the home from the porch. A single-pane sidelight with five engraved wooden panels underneath the glass is located on the north side of the door. Centrally located above the porch is a gable-roofed balcony. The area between the floor of the balcony and the roof of the porch is enclosed by wood panels. Details in the balcony include a sunburst carving in the gable and a frieze.

The interior of the home remains much as it did when constructed. Details include beaded board in most of the rooms, interior doors topped with transoms, and historic door hardware.

Several other buildings located on the property contributed to the National Register nomination. These include a well house, garage, barn, dipping vat, hitching post, and iron fence.

In 1915, Burkett received an appointment as the supervisor of the state prison located at Cummins. Supporting the abolition of the death penalty, Burkett did not complete his term of six years and, after just four, took a position with the Internal Revenue Service (IRS) based in Oklahoma City, Oklahoma. By 1921, Burkett was living in Little Rock (Pulaski County) and still working for the IRS. He died in Little Rock on January 19, 1947.

John Burkett’s son Carl lived in the home after his parents moved out. Upon John’s death, the property passed to John T. Burkett Jr. In 1960, the home was sold to Ouachita County’s county clerk Elizabeth Eppinette. The house was sold again in 1980, 1982, 1997, and 2018. It remains in private hands. 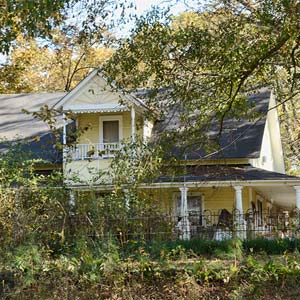