Campbell lies in a fertile valley of the foothills of the Boston Mountains. The caves and bluffs were utilized by Native Americans dating back to the Late Archaic Period. A Native American site, Cooper’s Bluff, northwest of Campbell near what is today Snowball (Searcy County), was added to the National Register of Historic Places on May 4, 1982. The Cooper’s Bluff Site is a prehistoric panel of pictographs located under a sheltering overhang. It is estimated to have been painted in about AD 1500. Some prehistoric Native American artifacts have also been found there. By 1828, white traders and hunters were in the valley, and the Native Americans were moved westward.

Along the bottomland of Cellar Creek, row crops such as corn, oats, wheat, cane, and tobacco were grown. Sometimes, the corn was utilized to make moonshine to supplement the family income. The Campbell family, originally from Tennessee, were the first white settlers in the area, having followed the Indian trail from Batesville (Independence County). John Campbell, the most prominent of the brothers, settled along Cellar Creek in 1837 with his new wife, Ann Blassingame, and their infant son. Two years later, his siblings and parents joined him as John moved his family several miles away to the northwest along Calf Creek. The story goes that as John reached the top of Campbell Mountain in his ox cart, he looked back and told his wife, “That place must be the devil’s cellar”—hence the name Cellar Creek for the stream flowing through the valley.

John was a farmer whose land holdings consisted of 280 acres, and he built a water-powered gristmill on upper Calf Creek. He taught school and held a variety of elected offices, including in the Arkansas House of Representatives. He served in the Mexican War and, a Whig in politics, initially opposed secession but was convinced to change his vote. He held the rank of first lieutenant in the Arkansas Confederate army during the Civil War and became a member of the Democratic Party after the war, being elected to the Arkansas Senate.

The Morrison family, which became a leading family of the community, was among the other pioneers of the region. Thomas Morrison from Johnson County, Illinois, settled his family along upper Sylamore Creek in 1842 and eventually opened a general store on his farm. He had taken a keen interest in politics. He joined the Whig Party while in Illinois and was opposed to secession.

Much of the violence on the homefront during the Civil War in Searcy County was related to lawlessness and banditry, as well as the suppression of the Arkansas Peace Society, which formed to oppose secession. Although the leaders of the society claimed primarily to be against secession and war in general, the newly formed Confederate government of Arkansas looked upon the members as traitors. As many members as could be caught were rounded up by Colonel Samuel Leslie, head of the Searcy County militia. In December 1861, seventy-seven men were chained together and marched from Burrowville—present-day Marshall—to Little Rock (Pulaski County). Outlaw Bill Dark terrorized the Searcy County region and hid out in Dark Holler (a.k.a. Dark Hollar) at Locust Grove (today, in Stone County) until he was killed by fifteen-year-old Jim Berry in early 1863. Many in the region used the mask of allegiance to settle old scores.

In July 1864, while the Morrison brothers were away fighting in the Civil War, Thomas Morrison, who was in his sixties, was at home with his wife, Polly, and their youngest child, Sarah Jane (age thirteen). A group of irregulars galloped into the Morrison yard, having heard that gold was hidden on the farm. They tied Morrison up and forced him to walk around in circles in the front yard with no water, trying to make him tell where the gold was hidden, until he collapsed and died from exhaustion. His wife and daughter buried his body near their home. When the sons returned from the war, they tracked down the jayhawkers and avenged their father’s murder. The road in Timbo (today Stone County) leading to the place where his body is believed to be buried has been named the Thomas C. Morrison Road.

A post office was established at Locust Grove in 1846 with Robert Cagle appointed the first postmaster. It closed in 1867. One was established at Calf Creek in 1857 with William Blair appointed postmaster. It closed in 1888. The community of Campbell, named for John Campbell and his family, became official in 1891 with the creation of the post office, which was open until 1953. James R. Arnold was the first postmaster of Campbell.

The Campbell Post Office/Kuykendall General Store, built about 1900, was converted into a post office and general store in the 1920s by Henry Kuykendall. The building was listed on the National Register of Historic Places on February 2, 1993. The now-derelict Kuykendall residence, which was sometimes used as a post office, is in a wooded area reclaimed by nature on County Road 73. The post office/store building and a spring house have been torn down.

The Campbell School, established in 1894, and the Lynnhurst School, established about the same time, served the educational needs of the community. The Lynnhurst building was torn down, but the Campbell school building from the 1930s still stands, unused yet maintained for an annual homecoming and reunion. Today, Campbell is part of the Searcy County school system, with a campus at Leslie and the main campus at Marshall. The Campbell School was also home to the Mount Zion Missionary Baptist Church, which was active until the 1990s.

The Absie Morrison homestead adjoins the Campbell Cemetery. The abandoned, dilapidated Absie Morrison farm house sits in a field with a view of the cemetery. Absie and his twin brother, Abbie, were noted fiddle musicians of their day, cutting a record for Victor in Memphis, Tennessee, in 1930 that has been reissued in anthologies of Ozark fiddle music.

The Campbell Cemetery, well kept and still in use, is one of the oldest in Searcy County. There is one African-American grave in the cemetery, marked Abbie. According to her tombstone, she was enslaved by the Campbell family.

A few farm houses are visible from the road, and one can often see cattle grazing in the pastures of the historic and once viable community of Campbell. The road to Campbell is rough and can be difficult to travel, especially during heavy rains.

For additional information:
Bishop, A. W. Loyalty on the Frontier or Sketches of Union Men of the South-West with Incidents and Adventures in Rebellion on the Border. Fayetteville: University of Arkansas Press, 2003. 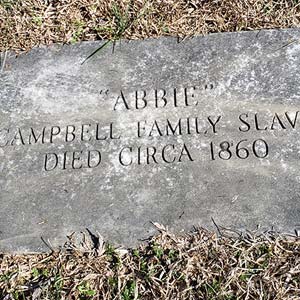