According to the 1910 U.S. census, Tuggle, then eighteen, was living in Hope with his widowed mother, Minnie. Both were native Arkansans. At the time, Tuggle was working in a factory as a handle grinder. On February 26, 1919, Tuggle married Alice Harris. At the time of the 1920 census, they were living in Hope with their daughter, Vadaleen. Both Browning and Alice could read and write. He was working as a jitney driver, and she was a washerwoman.

On March 14, 1921, an unidentified middle-aged white woman arrived in Hope to visit her daughter, who lived several miles out of town. Since the train arrived late, she decided to stay at a hotel in Hope and go to her daughter’s house the following day. Before making this decision, however, she spoke to Browning Tuggle, and he offered to drive her to her daughter’s house. According to the Arkansas Gazette, she declined, not caring “to make the trip alone with the negro at night.” Early the following morning, she began to walk to her daughter’s home. According to the Gazette, when she was about two miles from Hope, “the negro accosted her, and forced her at the point of a knife to keep silent. He then dragged her into the underbrush and assaulted her. Still threatening death, [he] commanded the woman to remain on the spot until he had time to get a certain distance away.” Once the assailant had fled, she ran toward the nearby home of J. M. Nix. She met another man on her way there and told him what had happened. He took her to Nix’s home, and a doctor and officers were called.

Apparently, suspicion rested on Tuggle, and he was arrested, but she was unable to identify him conclusively. In the meantime, authorities had arrested another African-American man, but she said he was not the assailant. Tuggle was brought before the woman again, and she stated that “she was not certain, but that the negro was the color and size of her assailant.” His clothing, however, was different. When he was arrested, Tuggle was well dressed, while she remembered her assailant as being dressed in a pair of brown overalls and a brown cap. A search of Tuggle’s home revealed a bloodstained pair of overalls matching her description. (The Gazette was unclear as to whether the bloodstains supposedly resulted from Tuggle or his victim being wounded in the alleged assault and struggle.)

Despite Tuggle’s protestations of innocence, a mob of about 100 men gathered and broke down the door of the jail. They took Tuggle from his cell, hanged him from the water tank tower, and riddled his body with bullets. According to the Gazette, more than 2,000 people viewed Tuggle’s body before it was cut down. According to the account of eyewitness Thomas Jefferson Brady, published in the McCurtain Gazette, there were actually 500 people in the mob and Tuggle was “hanged from an improvised scaffold attached to the water tower frame, and was left hanging there that all might see and take warning. His body was riddled with bullets, the shots being fired by infuriated members of the mob.” According to Brady, “excitement ran high and fears were felt by the more conservative people of Hope that the trouble might culminate in a race riot, as the negroes were sullen, resentful and threatening.” Authorities swore in 250 special deputies to patrol the streets of Hope, but the feared uprising did not materialize.

According to census records, Alice Tuggle remained in Hempstead County after her husband was murdered. In 1930, she was working as a cook for a family. 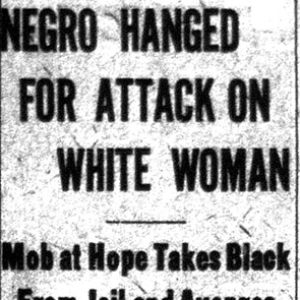