On May 5, 1883, J. C. McKetham and brothers B. F. Kelley and Robert J. Kelley established the Brinkley Argus newspaper in Brinkley (Monroe County) and went on to serve as its proprietors and editors. Robert J. Kelley soon sold his interest to McKetham, and William Blount Folsom purchased the newspaper in 1891. Folsom, serving as editor, published the paper with his wife, Harriette M. Doty Folsom, who was the paper’s business manager. Published weekly, the four-to-eight-page newspaper advertised itself as having the largest circulation of any paper in Monroe County in the 1890s.

The Brinkley Argus focused on local news in Brinkley and Monroe County. The paper regularly published church service schedules and Bible lessons from local churches. The Folsoms advertised the positive aspects of Brinkley and Arkansas as a whole. In 1898, the paper included a recurring advertisement titled, “Brinkley Has,” detailing a list of positive facts about the town. In 1910, William Folsom organized an advertisement train called, “Arkansas on Wheels,” advertising Arkansas throughout the country. This form of marketing was so successful that the “Arkansas on Wheels” train continued yearly through 1916.

On March 8, 1909, a deadly tornado hit Brinkley and the surrounding area and caused extensive damage; thirty-five people were killed, and hundreds were injured. The newspaper managed to publish an issue on March 12, 1909, and the next couple of issues went into great detail about the destruction of Brinkley.

After World War I began in Europe, there were only occasional updates until 1917, when the United States entered the war and articles about the war’s impact on the local community became more frequent.

The Folsoms continued running the Argus through World War II. In 1948, Harriette Folsom died, and William Folsom, who was in his eighties, retired from the paper. Mason William Clifton then took charge of the Argus, running it for forty years with his daughter, Flora Jean Clifton Elledge, and her husband, Franklin Hoover Elledge. Clifton and his family also published the Monroe County Sun out of Clarendon (Monroe County). Clifton died in 1988, and his headstone is inscribed with the quotation: “He was a good newspaper man.” After Clifton’s death, Flora and Franklin Elledge ran the Argus for a few more years before retiring.

In 1995, Katie Jacques and Thomas Jacques purchased the Brinkley Argus and the Monroe County Sun from the Elledges. Katie Jacques worked as the editor for the Argus, which was printed at the office of the Stuttgart Daily Leader. In 2007, the Jacqueses merged the Argus with the Monroe County Sun into the Central Delta Argus-Sun. The Argus-Sun continued to cover major news but focused on community news and memorable articles that readers would clip and hang on their refrigerators. Its subscriber base was about 1,800. The last edition of the Central Delta Argus-Sun under that name was printed a day late in December 2016 due to a fire at the Argus-Sun’s office.

In 2017, the Jacqueses sold the Central Delta Argus-Sun to Hayden Taylor. Taylor was nineteen when he took charge of the paper, making him one of the youngest newspaper owners in Arkansas (and likely the country) at the time. Taylor renamed the paper the Monroe County Herald, and though the paper was still produced from Brinkley, the new name reflected its coverage of county-wide activities and news from the three major cities in Monroe County: Brinkley, Clarendon, and Holly Grove. The Herald added more local sports coverage in addition to community news and eschewed endorsing any political party or issue. Taylor’s mother, Beth Taylor, became the managing editor of the Herald. The Herald’s slogan is “your hometown newspaper.” 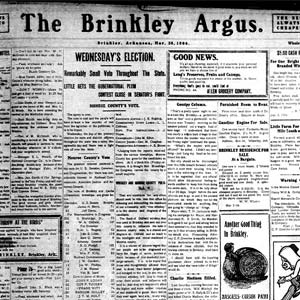