The Brandywine was a steamboat that caught fire in early April 1832, resulting in a significant loss of life among its passengers. The wreckage became the core of an island that the changing course of the Mississippi River eventually left on the Arkansas side of the channel east of Turrell (Crittenden County).

The 483-ton steamboat Brandywine left New Orleans, Louisiana, at 5:00 p.m. on April 3, 1832, with a full load of cargo and 145 passengers and crew members, bound for Louisville, Kentucky. When it was about thirty miles north of Memphis, Tennessee, on the evening of April 9, pilot Benjamin T. Head discovered that several carriage wheels and parts that had been packed in straw for transport had caught fire on the vessel’s hurricane deck. Captain William Hamilton tried to toss the burning cargo overboard, and a crew member attempted to douse the flames with water, but they were forced back by the fierce flames. A newspaper reported that “the wind blowing high at the time, in a moment the flame was so considerable, as to destroy the slightest hope of extinguishment.”

Head attempted to run the Brandywine ashore, but the vessel became stuck on a sandbar in nine feet of water. Hamilton later testified that “in less than three minutes from the time the fire was first discovered, it was impossible to live on the boat.” As desperate passengers tried to board the ship’s yawl to escape the flames, it upset and sank; a later account said that “the heat and smoke had now become so insupportable, that not less than a hundred persons, made desperate by fear and suffering, threw themselves into the river.”

The Brandywine’s officers determined that seventy-six people survived the disaster, with the rest perishing in the flames, drowning in the Mississippi, or succumbing to their wounds. John P. Aertsen, the ship’s clerk, wrote the Brandywine’s owners the day after the accident, saying, “Never was I witness to such a scene, dreadful and distressing.…Before I left the boat I saw several drown in attempting to reach the shore.…We buried one man this morning who died a short time after reaching the shore.”

An 1856 account of the Brandywine disaster alleged that the vessel was racing another steamboat, the Hudson, at the time of the accident and “for the purpose of producing more intense heat, and thus accelerating the boat’s speed, a large quantity of rosin had been thrown into the furnaces.”

The wreckage of the Brandywine remained lodged in the sandbar, and the silt that collected created an island that in the 1880s was on the east side of the Mississippi River’s main channel. Later work by the U.S. Army Corps of Engineers left what is now known as Brandywine Island on the Arkansas side, with most of the land in Crittenden County (part of the north and south ends are technically in Tipton and Shelby counties, Tennessee). In the early 1990s, timber baron and shopping mall developer Paul Broadhead acquired the island, which is separated from the Arkansas shore by a narrow secondary channel of the Mississippi. After his death in 2007, his widow, Sherry Broadhead, put the 9,885-acre Brandywine Island, available for use by hunters willing to pay a hefty fee, on the market. 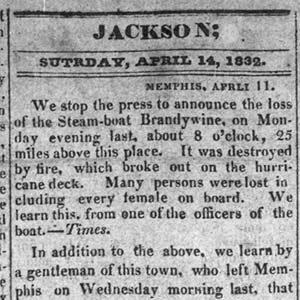