The Benton County Poor Farm Cemetery, which contains an unknown number of burials, is located approximately one mile northeast of downtown Bentonville (Benton County) in the Allencroft Subdivision on the west side of Northeast Young Avenue and north of Northeast Carnahan Court. It is the most important physical onsite reminder of the Benton County Poor Farm, established in the mid-nineteenth century for the care of the poor. It was added to the National Register of Historic Places on May 20, 2008.

The poorhouse system, which was first established in England, resulted in local governments establishing a place, many times a farm complex, where the poor could be housed and provided services. Though many Arkansas counties did not maintain a poorhouse, it was believed that each county had an obligation to address the issue of the poor.

In 1857, Benton County became one of the first Arkansas counties to initiate the establishment of a poor farm. In April of that year, a three-member commission was appointed by the county court to select a site for the building of such a poor farm. In October, the commission reported that it was unable to find such a site and petitioned the court for more time. In January 1858, the commission reported that it had selected a site north of Bentonville consisting of forty acres owned by William Clements and five acres owned by William McDaniel; the site included access to a spring. The area, which was purchased for $300, already had ten acres under cultivation, including four acres of wheat, and a log house. An additional plot of forty acres was added by the court after the initial land purchase.

Development of the farm was delayed until several years after the end of the Civil War, with little progress being made until about 1875, when the construction of a new county courthouse led to the removal of the old wood-frame courthouse for repair and subsequent use at the poor farm. By 1880, twelve people resided at the farm. The poor farm remained at this location until about 1905, when it was removed west of Bentonville. The farm remained in operation at the new location until the mid-1930s, when federal assistance under New Deal programs made such farms obsolete.

The original location included a cemetery. After the relocation, deceased tenants were interred in the “Pauper’s Section” of the Bentonville Cemetery. The cemetery contains an unknown number of graves beginning about 1860. Graves are identified by primitive fieldstone markers or depressions in the ground. None of the graves are identified by name. The cemetery is enclosed by a wire, wood, and plastic fence that was installed in about 2000 when the area began to experience residential development. (It is possible that the wire portion of the fence is older.) There are remnants of a stone wall on the east and south sides of the cemetery. On the east side of the cemetery is an entryway that has a decorative, arched iron gate with benches. At the top of the arch are the words “Poor Farm Cemetery Circa 1860.” A plaque was placed at the cemetery in 2008 identifying it as being included as a part of the National Register of Historic Places.

While the cemetery began seeing encroachment by residential development beginning in the early twenty-first century, it appears in no immediate danger, and area surrounding it retains much of its rural character. 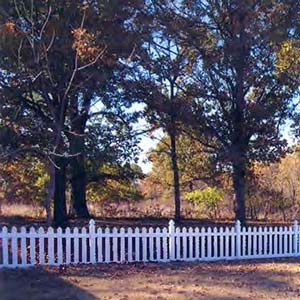 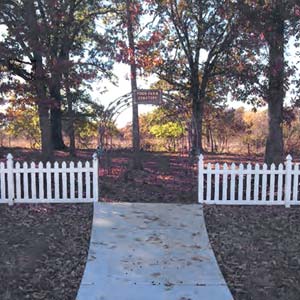 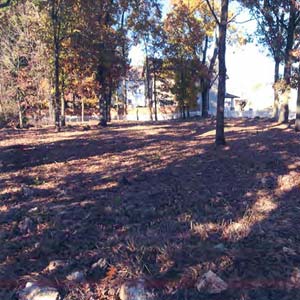 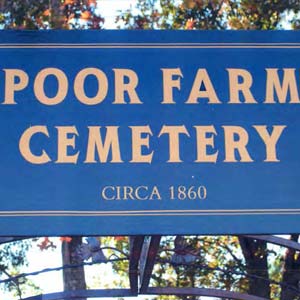