Arthur McCracken Harding, the first Arkansas-born president of the University of Arkansas (UA) in Fayetteville (Washington County), served his alma mater as a professor and in various administrative positions from 1905 to 1941, and then as president from 1941 to 1947. His teaching was marked by publication of books on mathematics and astronomy, and his administrative service developed new programs and extension of university education throughout Arkansas. As university president, he worked to quell political turmoil and helped UA face changes to the university brought by World War II.

Arthur McCracken Harding was born on September 3, 1884, in Pine Bluff (Jefferson County), the eldest of seven sons, to Charles Taylor Harding and Florence May Brewster Harding. (His great-grandfather was Dexter Harding, an early Pine Bluff businessman.) Harding’s family moved from Pine Bluff to Fayetteville in the 1890s so that Harding and his brothers could attend UA. His father became active in civic affairs in Fayetteville.

During his undergraduate years, which started in 1898, Harding received cadet honors and helped lead the university band, in which he played the flute and the piccolo. After graduation in 1904 with a BA in mathematics, he taught mathematics, Latin, and Greek at Hinemon University School in Monticello (Drew County) from 1904 to 1905 but then returned to work at UA. He married Edna Earle Nance of Rogers (Benton County) in 1905, and they had two children.

Harding began his career at UA as an instructor, followed by service as an adjunct professor and later an associate professor. He received his MA in mathematics from the University of Chicago in 1913, after attending several summer school sessions, and his PhD in mathematics from the same university in 1916 after a year’s leave of absence from UA. In the 1920s and 1930s, he had many varied responsibilities at the university. During World War I, for instance, he assumed the duties of university examiner and registrar.

Harding wanted to spread higher-education opportunities beyond the campus through all seventy-five counties in order to improve vocational and professional training. Realizing the additional possibilities for the university to serve returning veterans and the population of the state in general, Harding helped develop the General Extension Service to offer short courses either by correspondence or at off-campus sites throughout the state.

As the new director of general extension, Harding separated an agricultural division from general extension in 1919, and then promoted extension services such as the offering of lyceum courses and lectures; the sharing of phonograph records, educational films, and slide programs; and the formation of a statewide high school debating league. Extension courses directed to women’s study clubs had more than 1,000 enrollees in 1921. Overall enrollment in correspondence courses increased 246 percent in several years. Lyceum/lecture programs included musical performances, speakers for various special occasions, and expert advice to businessmen. Every two years, the law school faculty offered a course in legislative procedures for all new members of the Arkansas General Assembly. Of particular interest to Harding was offering public school teachers advanced training. The 1922 Razorback reported: “The General Extension Division is of real, all-the-year-round service to the people of the state. The slogan is ‘Arkansas University Is Your University—Use It.’”

Harding directed the extension division for twenty-two years and was president of the National University Extension Association from 1933 to 1944. While directing the extension service, Harding also helped start university radio station KUOA; he managed the station for ten years.

He also directed much energy to the Arkansas Alumni Association, serving as its secretary for twenty-five years, editing the first alumni directory in 1924, and founding the alumni magazine, which he edited for twenty years.

Harding had a deep interest in astronomy. He shared this avocation by giving speeches, illustrated with glass slides, throughout the United States and Canada, many on the Chautauqua circuit, and by publishing articles in magazines and newspapers. His book Astronomy—The Splendor of the Heavens Brought Down to Earth (1935), written for a general audience, became a bestseller.

In 1941, Harding was selected to be the twelfth president of the university. He followed J. William Fulbright, whose brief tenure in the position ended because of political differences between his family and newly elected Governor Homer Adkins. Within a year after the political turmoil involving the university’s board of trustees, Harding had restored the sense of order within the university. He lowered fees so that more Arkansans could attend. He started University of Arkansas News, a monthly newsletter from the alumni association, to secure the loyalty of graduates to their university.

One of the greatest challenges facing President Harding related to World War II: how to incorporate practical training with academics for future soldiers and how to accommodate returning veterans. With both groups, the university faced shortages of faculty, classrooms, laboratories, and housing. The academic calendar was changed in hopes of accommodating military service schedules. An Army Air Corps at the university quickly developed, as did specialized training for military and civilian jobs. Four housing projects were established, using trailers and barracks, some from recently terminated Civilian Conservation Corps projects.

Harding’s health suffered from the stress of the office. He resigned as university president in January 1947, and he died on December 24, 1947. He is buried in Fairview Cemetery in Fayetteville.

University of Arkansas School of Law 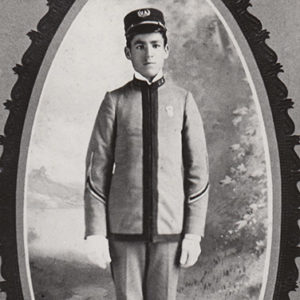