The Reverend Abraham Hugo Miller was an African-American businessman, a legislator during Reconstruction, and a church and educational leader in Helena (Phillips County). During Reconstruction, he served in the Arkansas General Assembly as a representative from Phillips County. At the peak of his business operations, he was considered the wealthiest black man in Arkansas.

Abraham Miller was born a slave in Colt (St. Francis County) on March 12, 1849. He was the son of Boyer Miller, who was born in Virginia in 1827; the name of his mother is unknown, though his stepmother was Henrietta Miller. During the Civil War, Miller moved with his mother to Helena. Like his father, he became a drayman, which involved hauling cotton, flour, meat, and water on wagons. As a young man, Miller moved to Vicksburg, Mississippi, to work for a railroad company but spent only a month on the job. He returned to Helena, where he started his own dray business. After the death of a horse, which convinced him that “livestock was not safe,” he began dealing in real estate, rental property, and money lending.

From 1872 to 1873, Miller attended public school briefly in Helena before moving on to Southland College, a Quaker school about nine miles outside Helena. According to Miller, he did not complete his schooling because it became too expensive.

The people of Helena elected him to the state legislature, where he served one term from 1874 to 1875. As a representative, Miller concerned himself mostly with protecting the interests of farmers. While in office, he remained active in the real estate and cotton trade.

Miller was a devout Baptist who avoided drinking, smoking, and staying out late. In 1877, Miller, who had been ordained two years before, was elected pastor of Centennial Baptist Church in Helena. Later, he served as pastor at the Roanoke Baptist Church in Hot Springs (Garland County) and then at the Pleasant Hill Baptist Church in Arkadelphia (Clark County), where he helped worshippers build a new church. He also started his own church on the Brown plantation near Phillips Bayou in Helena. In 1885, he worked as treasurer of the Baptist State Convention. He also served as state missionary, which he described as having “power to go forth and whoop up” Baptists in Arkansas.

In 1887, Miller married Eliza Ann Ross (1869–1938), an Arkansas native, near Arkadelphia. Miller said that he wanted a wife whose greatest virtue was her business sense. The couple had eight children, five of whom survived into adulthood. Both Miller and his wife served on the board of trustees at Arkansas Baptist College in Little Rock (Pulaski County), which was established in 1884. He also served as a delegate to the Republican National Convention in 1888. In 1893, he was elected president of the Pastors’ Union in Arkansas. From 1902 to 1905, Miller worked as school director in Helena.

In 1905, Miller attended the Baptist World Congress in London, England, and was impressed with social life in London, specifically the lack of racism he saw in his native South. “Our color cut no figure in our fare,” he wrote of his experiences at the Congress, “for there is no color line in London.” He referred to the occasion as “the largest and most enthusiastic religious meeting I ever witnessed.” While in Europe, Miller also visited Paris, France. On his trip home, he was denied immediate entry into the United States because of an outbreak of yellow fever and spent some time in quarantine.

Miller was a great admirer of Booker T. Washington, who, like Miller, was born a slave and went on to great success as a leader, educator, and businessman. In 1909, Washington asked Miller to speak about his business experiences at the National Negro Business League Meeting in Louisville, Kentucky. In 1911, Miller published an autobiography, How I Succeeded in My Business.

Miller died on July 8, 1913, at the age of sixty-four in Helena, near Fort Curtis. He is buried in Magnolia Cemetery in what is now Helena-West Helena (Phillips County). The black educator Joseph A. Booker called Miller “a shining example for thousands of young men of my race.” 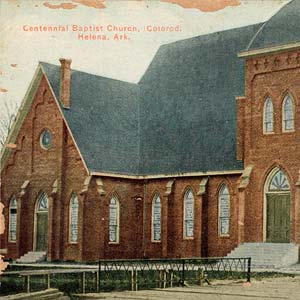