William Allan Oldfield was elected as a Democrat to the Sixty-first U.S. Congress and to the nine succeeding Congresses, serving from 1909 until his death in 1928. During that time, he served as a member of the House of Representatives Committee on Ways and Means and was chosen as chair of the Democratic Congressional Committee, campaigning across the country for Democratic candidates and incumbents. He was reelected to the Seventy-first Congress, his tenth consecutive term, but he died before he could take office. After a special election, his wife took his place in Congress, becoming the first woman in Arkansas elected to the U.S. House of Representatives.

William A. Oldfield was born in Franklin (Izard County) on February 4, 1874, the last child of blacksmith Milton Oldfield and his wife, Mary Ann Matheny Oldfield. He had three older sisters. He attended the local public schools in Franklin and Myron (Izard County) and graduated from Arkansas College (now Lyon College) in Batesville (Independence County) with a BA in 1896. He then taught school in Melbourne (Izard County) and LaCrosse (Izard County) and was principal at Richmond (Little River County) for two years, while reading and studying law. He attended Cumberland University School of Law in Tennessee during the fall of 1900, receiving an LLB degree.

In 1898, at the start of the Spanish-American War, Oldfield enlisted as a private in Company M, Second Regiment, Arkansas Infantry. He was promoted to first sergeant of the same company and later to first lieutenant before being mustered out in March 1899. Afterward, he continued studying law and was admitted to the bar in 1900 in Judge John B. McCaleb’s Court in Melbourne before commencing a law practice in Batesville with Judge Charles F. Cole. He married Fannie Pearl Peden in June 1901. The couple had no children.

Oldfield was elected Independence County prosecutor in 1902. He served until 1906, when he stepped down to run for the U.S. House of Representatives. He lost that race but came back in the next election cycle and won the Arkansas Second Congressional District seat in 1908. He took office on March 4, 1909.

He and his wife lived in an apartment in northwest Washington DC. Their home in Batesville burned in 1920. Oldfield was very well liked in the House and was chairman of the Committee on Patents for the Sixty-second and Sixty-third Congresses and minority whip for the Sixty-seventh through Seventieth Congresses. He also sat on the Ways and Means Committee. He inspired a young Wilbur Mills to seek a political future by complimenting him and telling Mills’s father that the boy “would make a fine Congressman some day.” The Washington Post described Oldfield thusly: “Equivocation and compromise were not in his nature. Party loyalty was his byword.”

Shortly after winning a tenth term in the Seventy-first Congress and suffering from fatigue from campaigning around the country, Oldfield underwent gall bladder surgery and died at age fifty-four on November 19, 1928, in Washington DC. He is interred in Oak Lawn Cemetery in Batesville. His wife, Pearl Oldfield, was elected to serve out his term, becoming the first woman from Arkansas elected to the U.S. House of Representatives and one of the first elected nationally.

For additional information:
United States. 70th Congress, 2d session, 1928-1929. House. Memorial Services Held in the House of Representatives of the United States, Together with Remarks Presented in Eulogy of William A. Oldfield, Late a Representative from Arkansas. Washington DC: Government Printing Office, 1929. 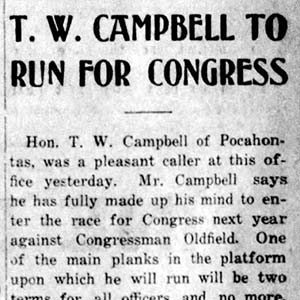