War Memorial Park is a multi-use park just north of Interstate 630 in the Midtown region of Little Rock (Pulaski County).

In November 1911, the Little Rock Parkway Association was formed with the express intent of securing and planning parks for public use. Within six months, it had consolidated with the new Little Rock Playgrounds Association, formed to secure public playgrounds for the city’s children. By 1913, the city had hired Massachusetts architect John Nolen to present a comprehensive system of parkways for the city. The plan was adopted, though never fully realized. However, the area that would become Fair Park presented a new and unique opportunity for the city to capitalize on Nolen’s 1913 plan. This area, called the Adams Subdivision, had already begun the process of being subdivided for residential development by 1910. In 1923, the city set aside some $300,000 for purchase and equipment of a park on this land, which was becoming well known as a new public gathering place, having hosted the state fair in 1922. In fact, a city ordinance named the location Fair Park in 1925, but the Great Depression and World War II made fairs erratic over the next two decades. In 1944, the city made a proposal to the new Arkansas Livestock Show Association to host the annual fair in perpetuity at Fair Park but was refused. The following year, the fair found its permanent home on Roosevelt Road.

In 1924, the city hired Chicago landscape architecture firm Pearse and Robinson to develop a master plan for the park. This included a golf course, a zoo, an amphitheater, a swimming pool, a children’s playground, tennis courts, a stadium, and more. The city founded its zoo in 1926 with a wolf and a brown bear that were relocated to enclosures in Fair Park. That same year, the city built a site for camping tourists. Traveling shows occasionally came to Fair Park; for example, Ringling Brothers and Barnum & Bailey Circus performed on October 5, 1927. By 1929, Fair Park had a permanent amusement park and contracted concession stands, and the city’s first Golf Course Commission was appointed, with the responsibility of developing an eighteen-hole course. A minor league baseball field was built for the Arkansas Travelers in 1931.

While much of the state and country stagnated during the Depression, Fair Park and its golf course enjoyed a boom, with its most iconic set pieces, natural stone structures built by the Works Progress Administration (WPA), being added at this time. Following the tumult of the Depression, Fair Park ultimately proved well situated for a city ready to expand. With the onset of World War II, Camp Robinson was reactivated as a cantonment for 50,000 soldiers, necessitating the construction of new housing. This was accomplished north of Fair Park with the building of Cammack Village as a suburb to Pulaski Heights, itself originally incorporated independently of the city in 1905 but connected to it by street railcar since 1903. The Heights was annexed into Little Rock in 1916. The booming wartime and post-war population situated so near to these once-remote recreational facilities led to banner years for Little Rock’s parks.

In 1947, city leaders, looking to build both a living monument to those who served in the military as well as a home in central Arkansas for the University of Arkansas Razorback football team, decided to combine the projects and construct War Memorial Stadium. Consequently, the city renamed Fair Park as War Memorial Park in 1948. The dedication of the stadium the following year was attended by President Harry Truman. By decade’s end, the parks system included more than 1,000 acres in Little Rock, not including smaller community playgrounds and green spaces.

Contractually, Little Rock began hosting up to three Razorback games per year, which counted as home games for the University of Arkansas (UA) team based in Fayetteville (Washington County). Game days drew crowds from all over the state, with some arriving days beforehand in anticipation of the contest. On these days, the golf course would be given over to parking, camping, and tailgating, sometimes to the detriment of the course. In November 2000, the Arkansas Democrat-Gazette reported that heavy rains combined with game day traffic in a contest between UA and Louisiana State University resulted in tens of thousands of dollars in damage to the course, even with turnout depressed by the weather.

After 2003, the Razorbacks began playing fewer and fewer games at War Memorial Stadium. Too, the golf course was closed in July 2019 for budgetary reasons. However, War Memorial Park remains a popular recreational site for Little Rock residents in the twenty-first century. 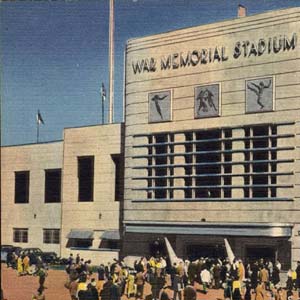