Dyess and Robert H. McNair Jr., the WPA’s director of finance and reports for Arkansas, were returning to Little Rock (Pulaski County) after conferring with agency officials in Washington DC. They were among fourteen passengers on the plane, known as the Southerner, along with pilot Jerry Marshall, co-pilot Glenn Freeland, and stewardess Perla Gasparini. The plane left the Memphis, Tennessee, airport at 7:04 p.m. The last contact with Marshall was at 7:18 p.m. as the plane headed to Little Rock. At about that time, farmer George Jones, who lived near Goodwin, heard a “deafening roar” and went to a nearby store to report what he suspected was a plane crash.

Law enforcement officers and other volunteers headed into the swampy area about two miles north of U.S. Highway 70, hoping that the veteran pilot Marshall had managed a forced landing. Instead, they found the shattered remains of the Southerner scattered over 400 yards in four or five feet of water, along with the mangled bodies of the passengers and crew. There were no survivors.

The Arkansas Gazette described the scene: “Bodies, slashed and broken, went hurtling through the trees, scattered like so many marbles tossed out of a bag. Life had ended for all of them before they landed in the marsh and were partially or entirely covered by the water of the oozing swamp. So terrific was the force with which the plane had plunged into the trees that even the clothes were shredded off the passengers and crew…”

The U.S. Commerce Department appointed a board of inquiry led by Eugene T. Vidal, the department’s director of air commerce, to investigate the disaster. Witnesses gave differing accounts of the plane’s engine sounds as it passed over Goodwin, and the Arkansas Gazette reported that a piece of metal from the plane appeared to have a bullet hole through it, while another report suggested someone may have hindered the pilot’s actions. By February 22, the board was satisfied that its inquiry “substantially eliminates purely mechanical failure.”

The final report issued on March 7 asserted several things: the plane’s low altitude was certainly a factor; it was possible a passenger in the cockpit may have interfered with the pilot’s sight; the switching of an empty gas tank for a full one may have caused a sudden drop into the tree line; and if the co-pilot had been alone in the cockpit he “may have become momentarily confused due to some minor difficulty.” The true cause of the crash, the report concluded, would “probably remain a mystery forever.”

While Dyess was widely respected, and the Mississippi County Colonization Project No. 1 he had championed as WPA administrator would be named in his honor a month after his death, his widow had considerable difficulty procuring benefits. The U.S. Senate had to intervene after the U.S. Compensation Commission denied her federal benefits on the grounds that Dyess was not a civil employee (the commission did award benefits to McNair’s survivors). She also sued the Equitable Life Assurance Company, seeking $30,000 in double indemnity benefits from two life insurance policies, an award that was ultimately upheld by the Arkansas Supreme Court.

At least three lawsuits were filed against American Airlines. The family of stewardess Perla Gasparini filed a federal lawsuit for undisclosed damages, while the widow of crash victim Nathan Porter sued for $16,000. While the outcome of those suits is not known, the Gazette reported this on November 19, 1936, about the estate of Frank C. Hart: “millionaire oil man killed in the crash of an American Airlines plane near Goodwin, Ark., last January; estate settled claim against the airline for $42,500.” 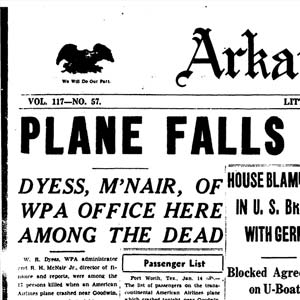