The influx of white settlers into the Pea Ridge area of Arkansas began during the decade prior to Arkansas statehood in 1836 and continued through the 1850s. Pea Ridge became one of the earlier college towns in Arkansas, offering business instruction, music education, and training teachers for early northwest Arkansas schools. Pea Ridge National Military Park, occupying the site of the 1862 Civil War Battle of Pea Ridge, is a major Arkansas tourist attraction. As part of the rapidly expanding economy of northwest Arkansas, Pea Ridge is poised for significant growth during the first decade of the twenty-first century. In fact, the city motto is “Anchored to the Past… Rising to the Future.”

Louisiana Purchase through Early Statehood
Pea Ridge dates to August 6, 1850, when its first post office was established. The town was laid out by Robert Carroll Foster, and Robert H. Wallace was the first postmaster. At first, the town’s name was one word, but it soon was changed to two. Before white settlers began arriving in the late 1820s, the region had been home to several Native American tribes. The name “Pea Ridge” came from a variety of wild peas which grew in abundance on the ridges. The Indian groups and the settlers arriving from Tennessee and other states valued these peas as a food source for families and as a forage crop for livestock. The peas, commonly known as hog peanuts or turkey peas, are still found, but in limited quantities.

Before the Civil War, area roads were few and undeveloped. Access from other regions was by horseback, wagon, or stagecoach on what became known as Old Wire Road. In the late 1830s, this road became part of the Trail of Tears, over which many Cherokee and other tribes moved on their way to Oklahoma reservations, having been forced from homes in the southeastern states.

Spring-fed streams are plentiful in northwest Arkansas. The settlement which became Pea Ridge began at the western edge of the original town site, near a spring that provided a water supply. Foster is thought to have built the first house at Pea Ridge and also established the first store, across the trail from his house. As streets were formed, the original main street began at the Foster Store and extended three blocks east.

Civil War through Reconstruction
Old Wire Road, which took its name from the telegraph lines running beside it after 1860, passed through the area five miles east of Pea Ridge, providing a connection north to Springfield, Missouri, and south to Fayetteville (Washington County) and Fort Smith (Sebastian County). Before 1881, mail for Pea Ridge was dropped at Elkhorn Inn and Tavern, a stagecoach stop, and carried to the town by horseback, buggy, or wagon. The Butterfield’s Overland Mail Company bought the stage line in 1858, making the road part of the Butterfield Overland mail route reaching west to California.

On March 7–8, 1862, the fields around Pea Ridge Mountain and Elkhorn Tavern became a Civil War battlefield as battle raged between 16,000 Confederate troops led by General Earl Van Dorn and 10,500 Union troops led by General Samuel R. Curtis. This was the largest Civil War engagement west of the Mississippi River and is credited with preserving Missouri for the Union. The Battle of Pea Ridge was part of the larger Pea Ridge Campaign. Pea Ridge National Military Park, on the battlefield site, was created by Congress in 1956 and dedicated in 1963.

Although the town of Pea Ridge did not suffer significant physical damage in the war, the times were hard. As a seceded state, Arkansas officially supported the Confederacy, but the support was not unanimous in northwest Arkansas. Some families with roots in Illinois, Indiana, and Ohio held Union sympathies. Movement of military units through the area brought instability and insecurity as control shifted many times. Raids by “bushwhackers” made the times dangerous and frustrating. One local family still has a chest of drawers damaged by a bushwhacker’s blade in a raid on the family home.

Pea Ridge settlers were mostly farm families. Early farms usually focused more on supplying family needs and less on production of crops for market. Most families kept livestock, raised large gardens, and harvested wild berries, such as the plentiful blackberries. As community life developed, farm families could market corn, oats, wheat, tobacco, butter and cream, eggs, and meats. After 1881, with the building of the railroad through nearby Garfield and Avoca, and with the rise of the new city of Rogers (all in Benton County), the area’s apple industry grew quite strong, supplying an economic boon to Pea Ridge and the county during the late nineteenth century and into the 1920s.

Post-Reconstruction through Early Twentieth Century
The first known school to operate at Pea Ridge was the Shelton Academy, opened in 1851 with a Professor Lockhart as teacher. For unknown reasons (possibly low enrollment and inadequate funds), the school closed in 1858. In 1874, Reverend Elijah Buttram opened a school at Buttram’s Chapel outside town, with Professor John Rains Roberts as principal. After five years, the school, sponsored by the Masonic lodge, the Methodist Episcopal Church, South, and local patrons, was moved into Pea Ridge where, in 1880, a two-story brick schoolhouse was erected. The school was granted a charter as an academy in 1884, and in 1887–88, the building was enlarged to accommodate 250 pupils. Professor Roberts directed the academy until 1894. Nannie Roberts, his sister, devoted her long career to teaching younger pupils at Pea Ridge Academy and later in the public school. By 1914, the academy was known as the Pea Ridge Masonic College. It operated until 1916, offering elementary, high school, and college-level instruction. Then, as community sentiment favored forming a public school system, the college was closed, and the property deeded to the Pea Ridge Public School. In 1930, the school district dismantled the college building and constructed a one-story building on the site. Principal Joe Roulhac, a noted local educator and carpenter, supervised the design and construction. Extra wings were added in the late 1940s and early 1950s. This community landmark, which housed the entire school before 1948, served as home of the Pea Ridge High School until 2001, when a new high school complex was completed on West Pickens Road. The 1930 building was finally razed in March 2005 after estimated costs to update the aging building to current school standards, or to convert it to other community uses, were determined to be prohibitive.

The Bank of Pea Ridge, incorporated in 1911, was one of only two banks in Benton County that did not fail during the Depression. After fifty-seven years in its original downtown location, the bank moved in 1968 to a new facility at Curtis Avenue and Leetown Road, where the new town center was developing. During the last quarter of the twentieth century, the bank’s ownership changed several times. It currently operates at Curtis and Leetown as Arvest Bank of Pea Ridge. The Pea Ridge Community Library occupies the old 1911 bank building downtown.

Through the years, many businesses have come and gone in Pea Ridge, such as the Pea Ridge Canning Company, which for long years canned tomatoes under various brands, supplying some local families a cash income during lean times. The building was destroyed by fire in January 1977, and the plant never reopened. In 1930, a Pea Ridge sports legend, major league baseball pitcher Clyde “Pea Ridge” Day, built the Day’s Place filling station at the main downtown intersection. This structure, built of native rough stone in an attractive design, with its small adjacent park area and shaded “loafer’s benches,” gave an appealing picturesque flavor to downtown Pea Ridge. It was finally removed in 1990 to make room for an expanding building materials business. One of Pea Ridge’s most enduring businesses has been Webb’s Feed and Seed, established in the 1930s by Hugh and Nell Webb. As a farm supply store and poultry production firm, Webb’s was influential, especially in the 1940s, in greatly expanding the local broiler industry, thus improving local farm incomes. The store, now owned and operated by Fred and Mabel Webb McKinney, continues in its original location on East Pickens downtown. Pea Ridge City Hall occupies a restored historic 1920s building at 227 East Pickens, previously the site of cafes, markets, and medical offices.

World War II through the Modern Era
The years after World War II brought major changes. In 1945, rural electricity was extended to the farms around Pea Ridge. City water and fire departments were initiated in the early 1950s. Televisions began appearing in homes about 1951. By 1954, the Pea Ridge Telephone Company had extended service to most rural homes in the school district. In place of the disappearing apple orchards, large poultry farms appeared, as did modern dairy farms and beef cattle operations.

But in the 1950s, many Pea Ridge young people were moving to the West Coast to find work. This began to change when, in 1958, the Daisy Outdoor Products moved its manufacturing operations to Rogers from Plymouth, Michigan, a move which sparked an expanding industrial transformation in northwest Arkansas and which has created thousands of jobs for area residents. The formation of Beaver Lake on the White River enhanced the area’s tourist and retirement attractions and provided abundant water supplies for Pea Ridge and other area cities.

As a result of these new economic opportunities, the population of Pea Ridge has grown steadily, increasing from 2,346 in 2000 to 4,794 in 2010. The town is still largely residential, with a variety of service businesses and several busy cabinet shops and small construction firms. Many residents are employed at large industrial and commercial firms in Rogers and Bentonville, so the Pea Ridge economy is closely tied to the economic life of the larger area.

Geologist Hugh Dinsmore Miser, who had a mineral named after him in 1950, was born in Pea Ridge and attended Pea Ridge Normal School. The Pea Ridge Mule Jump and Show was founded in 1985 and draws spectators from many surrounding states. 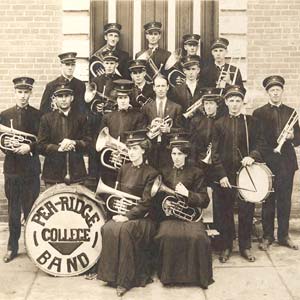 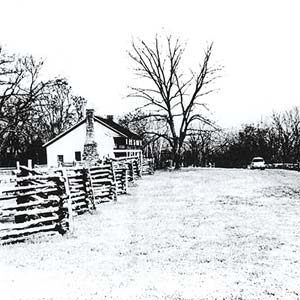