Arkansas, particularly in the mountainous regions, has often been criticized as being the home of the oft-caricatured hillbilly. The hillbilly of lore is lazy, shoeless, and likely has an outhouse rather than modern amenities such as indoor plumbing. Outhouses—otherwise known as the backhouse, privy, or necessary—once dotted the landscape. Originally a time-saving and sanitary invention, it remained a symbol of the poverty that plagued Arkansas citizens for generations.

The Greeks and Romans had interior chambers for human waste. The medieval population had garderobes if they could afford them, or troughs and chests. According to the Oxford English Dictionary, the word “outhouse,” used for a toilet, is a distinctly American term, the first recorded occurrence of which is as early as 1819.

Like some of their European predecessors, early American outhouses were constructed using wood. Some of the outhouses had multiple holes cut for seats, reflecting the needs of the various household members. For the illiterate, a moon was carved on the door of the women’s backhouse and the sun for the men’s. Outhouses could also be multi-storied structures that were attached or detached from the dwelling. A long-drop outhouse was usually built over a running body of water so that waste was removed. The more common structures were mobile units that could be shifted to a new pit.

As with most other inventions, improvements were made over time. Metal roofs and ventilation systems were added to some. Lime was used to eliminate waste, and other types of chemical toilets were in use later. Toilet paper was available as early as the late 1800s, but the requisite J.C. Penney’s catalog, discarded newspapers, old clothes, and corn cobs would serve the same purpose.

The stereotype of the lazy hillbilly resulted largely from a lack of sanitation. Around the beginning of the twentieth century, Arkansans, like many of their southern neighbors, were afflicted by typhoid, cholera, and hookworms. Cholera and typhoid were often a result of human waste polluting the community water supply. Hookworm was caused by the larvae infecting the human host, being transmitted through fecal matter into the soil, and then absorbed through the soles of the feet. This parasite then could cause a dry cough as it entered the lungs, as well as cause weight loss, anemia, and a variety of other side effects easily perceived as “laziness.” In 1909, the Rockefeller Foundation provided funding to eradicate the hookworm parasite. Treatment was effective, but prevention required shoes and a sanitary privy.

Education programs through the work of Dr. Charles Willis Garrison, who became the field director for the Hookworm Eradication Project in Arkansas in 1911, and others like him were helpful in the prevention of hookworm in Arkansas, but outhouses remained a luxury for some of the poorest members of the population. The Great Depression and the resulting New Deal programs provided access to materials and funding for outhouses in both residential and educational environments. Sometimes, low-interest government loans were available for individuals. Schools and other public sites benefited from New Deal construction of outhouses, among other improvements. In addition, doctors and engineers worked together to build better-ventilated outhouses and use safer disposal techniques during this period. In total, 2,309,000 sanitary units were built nationally and 40,000 pre-existing structures were repaired. In Arkansas, 53,808 new privies were constructed during this period.

While the New Deal programs brought outhouses to rural populations, they also brought new city sewage systems and improvements to pre-existing systems. Eventually, indoor plumbing, septic systems, and municipal sewage systems would replace the outhouse, but not completely. In the 2013 American Community Survey, U.S. Census workers asked citizens whether their homes had flushable toilets and discovered that approximately a half of a percent of the U.S. population was without indoor plumbing. In Arkansas, Newton County reported the highest deficit for the state—over five percent of the county’s population did not have indoor plumbing or flushable toilets.

Some of these numbers may be explained by the use of composting toilets and other “green” alternatives, but certainly not all. Composting toilets are part of a growing trend in eco-friendly toilets. Like low-flush toilets, they have a lower ecological impact compared with traditional toilets. Still, there remains some concern that if not properly ventilated or housed, the same risks associated with a poorly ventilated and maintained outhouse remain.

While the Works Progress Administration built around 53,808 outhouses in the state of Arkansas, it built more than that in fifteen other states between 1933 and 1943. Still, the stigma would remain associated with the Arkansas hillbilly more than with these other impoverished states; for example, in Mountain View (Stone County), an annual outhouse race is held. But the outhouse is not just a symbol of poverty and the hillbilly caricature; it is also a symbol of improved living conditions, improved health, and a stepping stone to the future.

Harding, Thomas. An Outhouse by Any Other Name. Little Rock: August House, 1999. 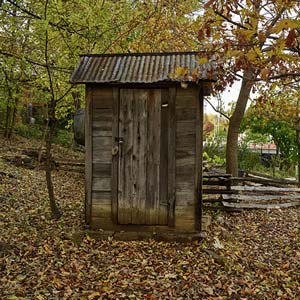