The Ouachita National Forest, originally called the Arkansas National Forest, was created through an executive order issued by President Theodore Roosevelt on December 18, 1907. Forest Service Chief Gifford Pinchot remarked at the time that this national forest was the only major shortleaf pine forest under the federal government’s protection. In January 1908, the Arkansas Sentinel newspaper reprinted an article from Forestry and Irrigation Magazine that praised the hearty spirit of cooperation manifested by Arkansas’s people and spoke of benefits to be gained by the conservation of timber supplies.

At first, the Arkansas National Forest consisted solely of reserved public domain lands (part of the Louisiana Purchase) south of the Arkansas River. The 1911 Weeks Law, which authorized federal purchase of forest lands in the eastern part of the United States, was later used to add thousands of acres of cutover or farmed out lands to the national forest. The largest increases in national forest ownership occurred from 1933 to 1941.

Today, the Ouachita National Forest consists of nearly 1.8 million acres located in twelve Arkansas counties and two Oklahoma counties. It is the largest and oldest national forest in the southern region of the United States. The forest includes sixty developed recreation areas, six wilderness areas, two national wild and scenic rivers, 700 miles of trails, several scenic byways, many special interest (botanical and scenic) areas, abundant historic and prehistoric resources, and habitat for eleven federally listed—and hundreds of other—plant and animal species. It also provides timber and other forest products to the nation, offers diverse hunting and fishing opportunities, and is the source of high-quality drinking water for hundreds of thousands of people in Arkansas and Oklahoma. 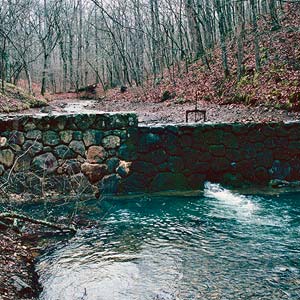