Monticello is the largest town in southeast Arkansas south of Pine Bluff (Jefferson County). Its history is one of continued growth and prosperity. Located at the intersection of two major roads and served early by railroads, it became an enduring commercial hub. A diversified infrastructure consisting of commerce, agriculture, and the timber industry created a strong foundation and sustained the town’s growth. The town also became an important educational and medical center.

Louisiana Purchase through Early Statehood
The first center of business and county court were at nearby Rough and Ready Hill, which was settled by 1836. Soon after Drew County formed in 1846, leading citizens decided that a new town should be built for the county seat. In 1849, Fountain C. and Polly Austin, early settlers, donated eighty-three acres for the town site. It is popularly believed that the citizens named the town after Thomas Jefferson’s Virginia estate.

The first courthouse was constructed in 1851 on the court square in the center of town. A second building replaced it in 1857. Lots were donated in the early 1850s for building Baptist, Methodist, and Presbyterian churches. Lots were also set aside for a male academy, a female academy, and a cemetery. A library was established in the courthouse in 1857. The earliest newspaper, the Sage of Monticello, began publishing in 1857. Among the pre–Civil War establishments were G. W. Simms & Co. General Merchandise, I. A. Price Dry Goods, M. A. Wilson & Co., Charles Millerd & Alexander Hale Contractors, Henry Lephiew Grocery & Liquor, M. H. Burks & Bro. Hardware, Lephiew & Duval Grocery & Liquor, and Dr. H. F. Bailey Drug Store.

Civil War through the Gilded Age
Commercial progress continued until the Civil War. The town witnessed three minor skirmishes in 1864 (January 13–14, March 18, and September 9–11) and three in 1865 (January 26–31, March 21–23, and May 23–27). They all concerned Union forces raiding for supplies and artillery and looking for Confederate soldiers. On one occasion, they entered Colonel William F. Slemons’s house to search for him, but he eluded them by hiding in a hotel loft. Rodger’s Female Academy, established in 1857, was used as a Confederate hospital. The Confederates used Phi Kappa Sigma Male College as a storehouse for supplies. Union forces burned the building in 1865, though the Union occupied the town. The last skirmish to occur in Monticello happened after the formal surrender of the Confederacy. Word had not yet arrived that the war had ended.

The Reconstruction period witnessed the organization of the Ku Klux Klan in the county in retaliation against “carpetbagger” rule. Officials and citizens reached an agreement that whites would continue serving as county officials and African Americans would be elected representatives. Two prominent black citizens, Curl Trotter and Lynn L. Brooks, are given credit for helping ease local tensions.

A newspaper, the Monticellonian, was established in 1870; it was followed by the Drew County Advance in 1892. The long-awaited Little Rock, Mississippi River, and Texas Railroad (later known as the Iron Mountain) reached the town in 1880 and provided faster and better long-distance transportation. From 1874 to 1896, Monticello hosted the Southeast Arkansas Fair. People attended from all over southeast Arkansas and northeast Louisiana. The town’s most enduring mercantile store opened in 1881 when John J. McCloy and Virgil J. Trotter Sr. formed McCloy & Trotter Mercantile and Grocery. After McCloy’s death, the business continued as V. J. Trotter & Sons until it was sold in 1970. In 1886, an African-American man named Buck Hunter was lynched in Monticello, while another man, James Jones (also referred to as W. A. Jones), was lynched in 1895. The first bank, Monticello Bank, opened in April 1887. Also in 1887, Hannah Hyatt began accepting orphans into her home. She donated her home and eighty acres to the State Baptist Convention in 1894, and the institution became the Arkansas Baptist Home for Children, which still exists. Telephone service reached the town in 1898. A cottonseed oil mill opened in 1890.

Early Twentieth Century
Monticello experienced immense growth in the early twentieth century. The Monticello Cotton Mill, founded by Warren Anderson, opened in 1900. Two cotton gins, a fertilizer plant, an ice plant, and a canning factory were built in connection with the cottonseed mill during this era. Several new banks formed. Mrs. James Gaston Williamson (née Lula Jackson) organized United Charities, composed of ladies from the town churches, in 1910. United Charities established a nursery for children whose mothers worked at the cotton mill and a home for women who were no longer able to work there. This effort led to the creation of the Vera Lloyd Presbyterian Home for Children in 1924; it still exists. Martin L. Sigman established a stave mill in 1914. The Sorosis Club, formed in 1902, established the Drew County Library in 1928. The next decade saw more progress. The Mack Wilson Hospital opened in 1930. The same year, Edward Lee Stephenson founded Stephenson’s Funeral Home, now the Stephenson-Dearman Funeral Home. A new courthouse was erected in 1932, and a municipal building was built two years later. A Coca-Cola plant opened in 1935, and a municipal swimming pool opened the next year.

In 1921, an African-American man was lynched for allegedly assaulting a white woman in nearby Wilmar (Drew County). At the beginning of the Great Depression in 1929, the Drew County Bank & Trust Company closed and was liquidated the following year. The manager, Henry Cruce, committed suicide. Although some businesses closed, the more established ones managed to stay open. The population increased during this decade as many farmers lost their farms and moved to town in search of work.

World War II through the Modern Era
Soon after the outbreak of World War II, the effects of the Depression began to diminish. The Monticello Cotton Mill manufactured a coarse grade of cotton material that was used by the military for tents, cots, and awnings. It ran at full capacity throughout the war and employed many, enticing more rural people to relocate. Camp Monticello was a prisoner-of-war (POW) camp south of Monticello; Italian POWs began arriving in 1943.

Education
Monticello has always been a center for schools. Rodger’s Female Academy closed during the Civil War and reopened as Wood Thompson School for Boys. The name changed to Thompson High School when it became coeducational. Phi Kappa Sigma Male College was established by an act of the legislature in 1859. It was organized by Professor James William Barrow, who named it after his college fraternity. The Monticello Male Academy and Bessilieu Schoolhouse opened soon after the Civil War. Hinemon University, under the tutorship of John H. Hinemon, was established in 1890. The first public school opened in 1876 for a three-month session, and a nine-month school opened in 1883. The name changed to Monticello High School in 1910. A private school for black students, known as Monticello Academy or Presbyterian School, was established in the late 1890s. A public school for black students opened in the late 1920s. The Fourth District State Agricultural School, commonly called SAS, held its first classes in 1910. The name changed to Arkansas Agricultural and Mechanical College (Arkansas A&M) in 1925, and it received junior college certification in 1928. It reached senior college status in 1939 and was accredited the next year. In 1971, the college became part of the University of Arkansas system and was renamed the University of Arkansas at Monticello (UAM).

Attractions
The Drew County Historical Museum houses impressive artifacts and serves as an archive for southeast Arkansas history. Several grandiose houses on North and South Main streets are on the National Register of Historic Places. Nearby Lake Monticello offers recreation. The historic Monticello Post Office, now home to the Economic Development Commission, is one of nineteen places in Arkansas where Depression-era post office art may be viewed.

Famous Residents
Major General John Shirley Wood, born in 1888, served in both world wars. Hershel Wayne Gober, born in Monticello on December 21, 1936, became the highest-ranking federal government official from southeast Arkansas. He served in the military for ten years, retiring with the rank of major in 1978. Governor Bill Clinton appointed him to become the Director of Veterans Affairs for Arkansas on January 4, 1988. With this position, he also served as a member of the governor’s state cabinet. He resigned on February 4, 1993, to go to Washington DC, where President Clinton appointed him to become deputy secretary of the U.S. Department of Veterans Affairs. In 1997, he served as acting secretary until a new appointment was made and then returned to the deputy secretary position the same year. He became acting secretary again in 2000 and served until January 20, 2001; when serving as acting secretary, he was a member of the Cabinet. 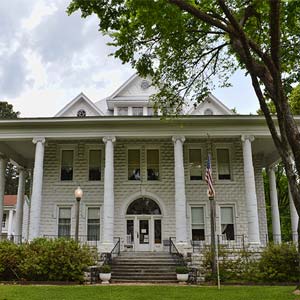 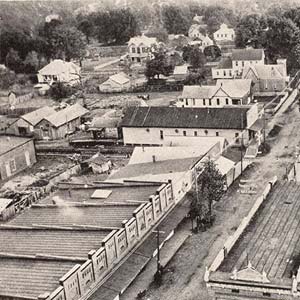