The Marion Hotel (also known as the Hotel Marion) in downtown Little Rock (Pulaski County) was one of the most famous businesses in Arkansas for much of the twentieth century. Construction began on the hotel in 1905. The Marion was the tallest structure in the state from when it opened in 1907 until 1911. The hotel closed in early 1980 and was demolished to make way for the Excelsior Hotel (which later became the Peabody and then the Marriott) and the Statehouse Convention Center.

The Marion Hotel was built by Herman Kahn, who moved to Little Rock from Frankfurt, Germany, in 1870. (Kahn’s great-grandson, Jimmy Moses, has been the driving force behind many of the developments in downtown Little Rock in the late twentieth and early twenty-first centuries.) Kahn and his sons, Sidney L. Kahn Sr. and Alfred G. Kahn, were heavily involved in banking and real estate development. Sidney Kahn developed the Prospect Terrace neighborhood of Little Rock. The hotel was designed by architect George R. Mann.

The 500-room Marion had green carpets, bellboys in green uniforms, and a marble fish pond in the lobby. The hotel was named after Herman Kahn’s wife, Marion Cohn Kahn. The Marion billed itself as the “Meeting Place of Arkansas.” The state’s top organizations held their conventions at the Marion. Its bar was named the Gar Hole and featured a large, mounted alligator gar. Famous visitors to the Marion through the years included Eleanor Roosevelt, Harry Truman, Douglas MacArthur, Helen Keller, and Will Rogers.

On June 10, 1949, Truman addressed those attending the reunion of the Thirty-fifth Infantry Division at the Marion. He said of the reunion: “I didn’t want to miss this one, particularly because it was in Little Rock. I have had some wonderful times here. I remember one time, in the Marion Hotel, it was my privilege to be the guest of Mrs. [Hattie] Caraway when she was running for re-election. I never had so much fun in my life as I did then. And Mrs. Caraway, who is still in Washington, enjoyed herself immensely. You have two wonderful senators from Arkansas, and you have the delegation from the Congress. I hope we will have the usual good time and that everybody will go home without a headache.”

Writer Richard Ford, who won the Pulitzer Prize for Fiction for his 1996 novel Independence Day, once lived in room 600 of the Marion. Ford was born in Jackson, Mississippi, in 1944. His father had a heart attack when Ford was eight and died when Ford was sixteen. Beginning in 1952, Ford had spent summers in Little Rock with his maternal grandparents. Ford’s grandfather, Ben Shelley, was the hotel manager. “It created for me a nice sense of comfort because I knew everybody,” Ford said in a 2013 interview with the Arkansas Times. “Everybody was family: all the bellmen, all the telephone operators, all the front office people, all the cooks, all the waitresses, all the waiters. And yet all around that little island of home-like experience, there were all these people coming and going, day in and day out, people I would never see again. I could lie in my bed and I could hear the buses coming and going from the Trailways bus station. Down behind the hotel, I could hear the Missouri Pacific switch cars. I could hear voices out on the street. I could hear sirens. I never thought of it as lonely.”

The Marion, and particularly the Gar Hole, sometimes was referred to as the “real state Capitol” since so many legislators congregated there during legislative sessions, cutting after-hour deals and forging compromises. During its final few decades of existence, the Marion was owned by Southwest Hotels, Inc. Henry Grady Manning had expanded Southwest to include hotels in Little Rock; Hot Springs (Garland County); Memphis, Tennessee; Kansas City, Missouri; and Vicksburg, Mississippi.

In Little Rock, Southwest owned the Albert Pike, Lafayette, and Grady Manning hotels, in addition to the Marion. The Grady Manning Hotel, which had opened in 1930, had originally been known as the Ben McGehee Hotel. It was designed by architect Julian Bunn Davidson and was owned by Benjamin Collins McGehee. In Hot Springs, Southwest owned the Arlington and Majestic hotels. Only the Arlington continues to operate as a hotel.

The Marion and the adjacent Manning Hotel were imploded on the same day, February 17, 1980, to make way for the Excelsior and the city’s new convention center. Little Rock television stations provided live coverage of the implosion on a cold Sunday morning.

After the Marion and Manning hotels were razed, construction on the Excelsior began. It opened in 1982. It later became the Peabody Little Rock and was reflagged as a Marriott in May 2013. The Excelsior was the brainchild of Batesville (Independence County) real estate developer Doyle Rogers Sr., who died in February 2013. A suite at the Marriott is named for Rogers. 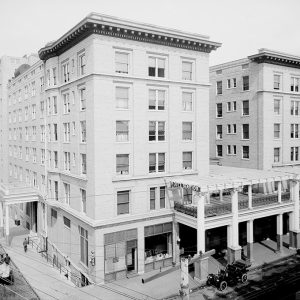