A sixteen-year-old African-American boy named Levi Graves was lynched on August 24, 1888, in Sevier County for having allegedly molested and injured, the previous day, a five-year-old white girl. The girl was the daughter of Joseph A. Tally (whose name is also rendered J. F. Talley in some reports), a “highly respected farmer of the community.”

According to the Arkansas Gazette, Graves was the “son of Peter Graves, a well-known and utterly worthless old negro living near Brownstown.” Census records show that, in 1880, Levi Graves, then eight years old, was living with his parents, Peter and Patsey Graves, in Mineral Springs (Howard County). He was one of ten children in the household. His parents were listed as farm laborers, as were the elder children of the family aged nine to sixteen. Joseph Tally does not appear in public records in either Howard or Sevier counties.

According to reports, on August 23, Tally, whose home was in Howard County about three miles from Brownstown, was away from home. His youngest child was sick, and while his wife was tending to her she heard her five-year-old daughter screaming from the barn. When she ran to the barn, she saw Graves, who had been working for the Tally family for a couple of months, near the barn. She found her daughter in the barn “frightfully injured” and in critical condition. Tally returned about an hour later and informed Constable Bradburn, who went in pursuit.

Graves was captured before sundown, and Bradburn had difficulty keeping him safe from Tally. Bradburn put Graves under the care of four guards, but according to the Arkansas Democrat, “The indignation of the citizens knew no bounds and the life of the young fiend could only appease their wrath.” Around 8:00 p.m. on Friday, a mob of between 150 and 200 masked men seized Graves and took him two miles away and hanged him. On Saturday morning the mail rider found his body hanging over the road, “a warning to whatever of the spirit of lurking deviltry might still linger among his class in the community.” On August 29, the Gazette reported that “The negroes all say: ‘Well done’…and as there is no doubt about the assault, all of the community appreciate the mob’s work.” There were no clues as to the identities of the members of the mob. 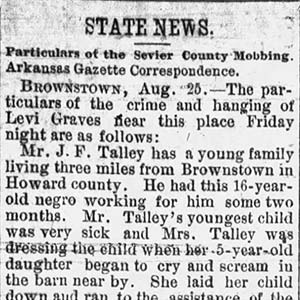