Indian Mounds were constructed by deliberately heaping soil, rock, or other materials (such as ash, shell, and the remains of burned buildings) onto natural land surfaces. In Arkansas and elsewhere in eastern North America, Native Americans built earthen mounds for ritual or burial purposes or as the location for important structures, but mound-building ceased shortly after European contact due to changes in religious and other cultural practices. Mississippian people in eastern Arkansas were using mounds when Spanish explorers arrived in 1541, and the Caddo in the Red River valley were still using mounds during the winter of 1691–92, when explorers from Mexico visited them. Most of the thousands of mounds built in Arkansas have been destroyed by modern development and vandalism, but several hundred remain. Today, they are recognized as important religious and cultural monuments.

The oldest mound in Arkansas, believed to be 3500 years old, is in the southern part of the state. This mound, only recently recognized, belongs to the Archaic Tradition, a hunting and gathering lifeway that existed across North America for thousands of years. Archaic mounds are uncommon and are known in small numbers in the Lower Mississippi Valley. The Arkansas Archaic mound, known as the Lake Enterprise Mound, is similar to others in northeastern Louisiana, but its function is still largely unknown. At times, only a single Archaic mound was built at a site. However, groups of mounds forming a rough enclosure have also been found. The mounds are roughly dome-shaped and appear to contain little other than earthen fill. Their main purpose may have been as symbolic representations of Archaic religious beliefs and as places where rituals and other events that were important to the surrounding population were carried out. Mounds also serve as physical symbols of the claims that a group of people makes to control of a particular area or landscape.

Since Archaic people did not live in large or permanent communities, workers from dispersed family camps and small settlements would have gathered periodically to build and maintain mounds. These projects were probably supervised by local people with religious expertise or personal prestige, and they would have required a small amount of time or effort on the part of the workers.

The next clear expression of mound-building in Arkansas took place during the Woodland Period, from roughly 600 BC to about 1000 AD, a time in which native people began experimenting with small-scale horticulture to supplement hunting and gathering. Early and Middle Woodland mounds were typically used as burial places. Small dome-shaped mounds in the Red River valley of southwest Arkansas and adjoining Louisiana and Texas held deposits of human remains, usually cremated, and small mementos or offerings. Some mounds were built over a crematory basin; subsequently, cremated remains were periodically interred in the mound or placed on it, and new soil was added to refurbish the surface and bury the deposits. In southwest Arkansas, these mounds were made by the Fourche Maline people, who were local Woodland populations. Mounds at the Helena Crossing Site in Phillips County held the remains of several people interred about 2,000 years ago in elaborate log-lined tombs, along with a variety of personal and ritual objects. This practice is related to Hopewell culture in the Midwest, and to Marksville culture in the lower Mississippi and Red River valleys.

Not all Woodland people built mounds, or were buried in them. The religious beliefs that lay behind mound burial, and the social rules that dictated who was buried in a mound and who was not, are still largely unknown. Since many mounds have been destroyed without study, some information about these cultures has already been lost. Mounds served as symbols of a group’s common heritage, however, and as monuments for a community’s claim to a territory or landscape.

Not all Woodland mounds were constructed for burial. Some people built earthen platforms with flat tops that were used for public activities of various kinds. Religious and political centers that served dispersed regional populations had both kinds of mounds. Toltec Mounds (Lonoke County), the center of the Plum Bayou culture in central Arkansas, is the largest such site. Over its 400-year history, at least nineteen mounds were constructed. Low platforms were locations for public feasts and other rituals; at least one mound was used for burial, while others served still-unknown purposes. Mounds were periodically refurbished or enlarged and eventually went out of use.

Woodland Period mound groups were not villages; people congregated at centers periodically for rituals and social activities and then dispersed to family camps and other small settlements, leaving perhaps a few caretakers behind as permanent residents. Indians in Arkansas did not begin to live in compact villages until they developed a farming lifestyle based on corn (maize), squash, and other domesticated plants, and with these changes in lifestyle came changes in mound construction and purpose.

These changes took place between 900 AD and 1100 AD and begin what is known as the Mississippian Tradition, which is characterized by elaborate societies with settled farming communities, large populations, social hierarchies, and rich material culture. Mounds were typically flat-topped earthen pyramids used as platforms for religious buildings, residences of leaders and priests, and locations for public rituals. In some societies, honored individuals were also buried in mounds. Some mounds in Arkansas were surrounded by compact towns, such as the Parkin Site in Cross County. Other mound groups, such as the prehistoric Caddo mound sites in southwest Arkansas, were centers for dispersed populations residing in nearby hamlets and small villages.

Platform mounds were refurbished periodically. Buildings were replaced, new soil was used to enlarge and re-shape the mound, and the function of the mound may have changed as well. Some centers had several mounds and were used for centuries. These centers were not just collections of mounds, however. The location and arrangement of mounds, and the processes by which they were built and refurbished, were all linked to the larger sphere of religious beliefs and rituals. Mounds and mound centers embody the fundamental beliefs and values of Mississippian cultures as well as serving as the centers for Mississippian life.

People elsewhere in Arkansas followed variations of Mississippian culture during this time. In southwest Arkansas, the Caddo tradition was one variant. Flat-topped earthen mounds were used as platforms for religious buildings. From time to time, the buildings were burned or dismantled, and the mounds were enlarged, entombing the ruins of the older buildings within. Caddo mound centers typically had one flat-topped mound and at least one dome-shaped mound that had been erected over the ruins of a special building that may have been the residence of the community leader or the site of special rituals. Conical mounds were sometimes also used as cemeteries for important families, although only a small number of Caddo were actually buried in mounds. Few people resided at Caddo mound centers. Most lived in family homesteads and small villages scattered across the countryside and congregated at the centers only for important events. Mounds were also constructed in the Arkansas Ozarks and in the Arkansas River Valley. These flat-topped pyramids encased the ruins of ritual buildings and also served as local political and religious centers for dispersed farming populations.

Hundreds of mounds have been lost to erosion, development, and vandalism in the last century, but many hundred remain. Every mound in Arkansas today is an important symbol of Arkansas’s Indian history.

Bowne, Eric E. Mound Sites of the Ancient South: A Guide to the Mississippian Chiefdoms. Athens: University of Georgia Press, 2013.

Krause, Richard A. “Observations on the Excavation of a Mississippian Mound.” In Mounds, Embankments and Ceremonialism, edited by Robert C. Mainfort and Richard Walling. Research Series No. 46. Fayetteville: Arkansas Archeological Survey, 1996. 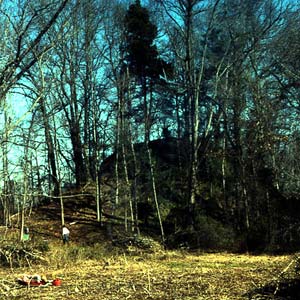