The Sherman Mound is one of the larger and better-preserved Native American earthworks in the Central Mississippi Valley. The site is located in Arkansas’s Delta region within Mississippi County. During the Middle Mississippian archaeological period (AD 1200–1400), the Sherman Mound and its associated village was a large, fortified town covering forty-four acres that served as a civic/ceremonial center for a chiefdom-level society.

The Sherman Mound site witnessed multiple occupations. Archaeological evidence, principally pottery analysis, suggests Native Americans initially colonized it during the Late Woodland period (circa AD 400–700) when it was a small-to-medium-sized Baytown phase village. The most significant occupation of the site took place during the Middle Mississippian period (AD 1200–1400), when the site was developed into a large, fortified Middle Mississippian town with a mound-and-plaza complex. Following its abandonment during the Late Mississippian period, the primary mound at the site was re-used circa 1650 as a burial place by an undetermined Native American group. During the Historic Tenant period (AD 1875–1950), the mound was part of Sans Souci Plantation, and a number of houses existed along roads within the former Native American town, which was otherwise covered by cotton fields.

Some of the best-known archaeologists in the state and nation have studied the site, but their investigations were rather limited, and until recently the site was relatively poorly understood. In 1879, Congress created the Bureau of Ethnology within the Smithsonian Institution, and a branch known as the “Division of Mound Exploration” was established in 1881 specifically to determine “the origins of the mounds.” In Cyrus Thomas’s classic book Mound Explorations, in which the racist “Mound Builder myth” is destroyed, an illustration and description of the Sherman Mound is provided.

Dr. J. K. Hampson, a local amateur archaeologist who lived nearby at the Nodena Plantation, was active at the Sherman Mound from 1897 to at least 1938, collecting artifacts and recording fieldnotes. In the twenty-first century, his items from the Sherman Mound are curated in Wilson (Mississippi County) at the museum named after him: Hampson Archeological Museum State Park.

During 1940, Phillip Phillips, with the Peabody Museum of Archaeology and Ethnology and the collaborative Lower Mississippi Survey (LMS), recovered a surface collection, took photographs, and prepared a sketch map of the site. Phillips was the first to suggest it was a Middle Mississippian component.

The Arkansas Archeological Survey (AAS) was created and funded by the Arkansas General Assembly in 1967. Since then, archaeologists from the AAS’s Arkansas State University station have made numerous visits to the Sherman Mound, and this resulted in it being assigned the trinomial 3MS16, its official state site number.

After 2000, several contract archaeologists examined the site during Section 106 compliance studies. The most significant of these took place in 2016–17, when C. Andrew Buchner and others with Panamerican Consultants conducted multi-disciplinary investigations at the site in order to mitigate for damage done to the mound flank by a backhoe during railroad construction. Work conducted by Panamerican included the following tasks: accurately delineating the surface distribution of artifacts across the site; processing soil samples recovered from the trench on mound flank; conducting a gradiometer (geophysical) survey of 106 acres; and creating a detailed topographic map of the site using a drone.

Pottery was the most abundant Native American artifact class that was recovered, and it included types diagnostic for a Middle Mississippian occupation, such as O’Byam Incised, Matthews Incised, and Mound Place Incised. Importantly, three radiocarbon dates were obtained from charcoal samples from the trench: two are Middle Mississippian (AD 1285 versus AD 1295), and one from another context is Proto-historic or early Historic (AD 1650). Analysis of the faunal remains (i.e., bone) and plant remains revealed the population’s heavy reliance on fish and the consumption of both wild and cultivated plant foods (maize). However, the gradiometer survey produced the most impressive results, as it revealed that the Sherman Mound was surrounded by a palisade wall with a circumference of one mile, a fact previously unknown. Within the fortified palisade wall, all the basic architectural design elements of a Mississippian town were identified: a primary mound-and-plaza complex, two secondary mounds that had been plowed down, and discrete residential or habitation areas.

Today, the most conspicuous remaining element of the former Mississippian town is the twenty-foot-tall Sherman Mound itself, which covers a 333′ x 132′ area. There is no surface evidence for the rest of the town, which is covered by large fields. The Sherman Mound and village archaeological site has religious and cultural significance to the Quapaw Tribe of Oklahoma, and the site was placed on the National Register of Historic Places on February 2, 2018. 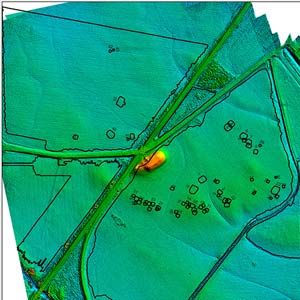