Herpel is located in Washington Township off Highway 5 on Herpel Road (64) in Cave Hollow on Rocky Bayou Creek. Herpel is about five miles west-southwest of Guion in Izard County and about six miles east-northeast of Mountain View, the county seat of Stone County. Herpel is approximately two miles south of the White River.

An early settler of Herpel was Harmon Van Ness, who was originally from Albany, New York, and a Civil War veteran of Company G, Twenty-Fourth Regiment, New York Infantry. Van Ness was wounded in battle and taken as a prisoner of war but escaped and changed his name to Harrison Williams. When the war ended, he worked for the government in military departments, which took him to Arkansas. On November 24, 1866, Harrison Williams married Sarah Elizabeth Lancaster. The couple built a cabin at Richwoods in Stone County in 1867.

Harrison Williams and his oldest son, Charles Franklin Williams, homesteaded land in the wilderness on Rocky Bayou. A post office opened on the bayou in 1907. The son, Charles Franklin Williams, submitted the name “Herpel” to the U.S. Postal Service, and this was accepted. His daughter, Verna Williams, believed her father chose the name based on something he had read, as he was an avid reader. The first postmaster was Dora Alberta (Nesbitt) Williams, wife of Charles Williams, who assumed the position March 26, 1907; the last postmaster was Latika Atchison, appointed in 1956. The mail was first delivered by horseback, and the postmaster was paid according to the number of stamps canceled at the post office. The post office closed in 1957.

Logging and farming were important economic activities for the settlers of Herpel. By the early twentieth century, Herpel had a grist mill, cotton gin, stave mill, and sawmill first operated by John Thomas Nesbitt and his son-in-law Charles Williams; Stanley Wade purchased and operated the mill in 1926–1927. Originally, the grist mill and sawmill were water powered. In the 1920s, a gasoline engine operated the machinery. Production included posts turned on a lathe. The mill took advantage of a large cave in the limestone cliffs on Rocky Bayou Creek for equipment storage.

At one time, the Herpel community was served by three county schools: Crossroads, Herpel, and Burrow College (a school for training teachers), which later became the Rocky Bayou School. All three schools were first housed in log cabins. The Herpel School was built in 1909–1910. The other two appeared around the same time. The largest of the three was Herpel School, which at one time had ninety-seven students enrolled. The schools consolidated with the Mountain View School District in 1945.

Church congregations first met in the school buildings. On March 5, 1923, the cornerstone was laid for the Herpel Missionary Baptist Church, which is still active in the twenty-first century.

In April 1929, a deadly tornado swept through the area, with the James Bottoms being especially hard hit. Crossing the White River, the twister also devastated Guion. Herpel never fully recovered from the natural disaster, although the little hamlet eventually began increasing in population again. In the twenty-first century, Herpel continues to be located in a somewhat isolated part of the county, with outsiders at times having difficulty finding it. Most of the non-agricultural jobs are in nearby Mountain View, where most of the shopping is done. The restored mill, replica of the old post office, and Herpel church are the main attractions for visitors.

Artist Loretta Babak began using the replica post office building for her studio. She and her husband, Walter Babak, who retired and moved from Michigan to Herpel, restored an old mill and began displaying interesting items and inventions on Rocky Bayou. Because he tended cattle on the other side of Rocky Bayou Creek, Babak devised a bicycle-type apparatus to cross the creek. He used it especially when the bayou was flooded. 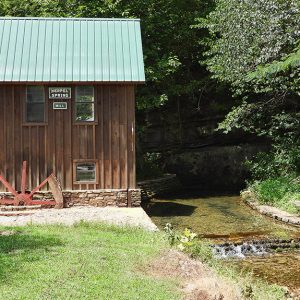