The Fuller-Shannon House is located in the Parker’s Woodland Hills subdivision of Jonesboro (Craighead County). The house, completed in mid-1969, was designed by notable local firm of Stuck, Frier, Lane & Scott, Inc. The design of the house was based on the work of internationally renowned architect, and Arkansas native, Edward Durell Stone, specifically his “modern dogtrot” designs of the mid-1950s. It was listed on the National Register of Historic Places on September 14, 2020.

The Parker’s Woodland Hills subdivision was created by brothers Hubert J. and Olan E. Parker Jr. and was laid out to take advantage of the hilly nature of the area. Streets were placed in the valleys to give the neighborhood natural drainage and inhibit standing water after heavy rains. This scheme resulted in long blocks along curving streets, which created irregular, pie-shaped lots of various sizes. In order to maintain the scenic nature of the development, the Parkers had the electrical lines run down the middle of the blocks so that they were less visible from the street. Due to the hilly nature of the area, many of the houses had to be placed far back on the lots or far forward, creating either tiny backyards or minimal front yards.

This was the case for the lot at 1408 Twin Oaks Avenue, which was purchased by Robert and Anita Fuller in late 1967. Due to their modest incomes, their new home needed to be economical in both scale and budget. Additionally, since Robert Fuller had contracted polio as a teenager and required the use of forearm crutches, the house needed to be handicapped accessible. The Fullers were acquainted with several architects in the community, including Aubrey Scott of the local firm Stuck, Frier, Lane, & Scott, Inc., who designed the house. However, Jonesboro was hit by an F4 tornado in May 1968, which killed thirty-four people and injured 300. The tornado’s path traveled just south of the Woodland Hills development but completely destroyed the recently completed Fairview neighborhood. The amount of destruction in the city caused a delay in the construction of the house, as contractors, laborers, and available resources were diverted to assist in repairing the homes and businesses lost or damaged. Due to that delay, the Fullers were not able to move into the house until early 1969.

The Fullers lived in the house at 1408 Twin Oaks until 1978, when Robert was offered a position as choral director at Oak Park and River Forest School in Oak Park, Illinois. Howard and Claudia Shannon bought the house from them and continue to own it in the twenty-first century.

The Fuller-Shannon House is a three-bedroom, two-bathroom home in a U-shaped plan, with the bottom of the “u” facing the street. The house is constructed on a concrete block foundation, which is recessed from the plane of the façade on the three sides where it is visible. The exterior walls are covered in vertical-board wood siding, with the gables of the front and rear being entirely glazed. The public/street façade of the house features no eye-level windows, except in the entry area, which has floor-to-ceiling glass. However, the rear façade, which overlooks a small garden area, has floor-to-ceiling glass with substantially more glazing. The house is topped with a shallow gable roof with a rubber membrane covering. The roof extends beyond the wall plane to create deep eaves and is supported by five beams that extend the full depth of the house.

The interior of the Fuller-Shannon House is divided into three sections: the dining/kitchen area, the living area, and the private/sleeping area. The central living area extends from the front to the rear of the house and centers on a large fireplace. The dining/kitchen area opens from the living area to one side with a hallway that provides access to the bedrooms opening off the other side, through two doorways. The private/sleeping area of the house is composed of three bedrooms, two bathrooms, a small study, and a small laundry space. 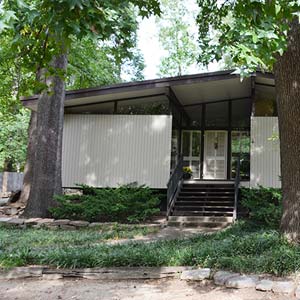