Crawfordsville is a second-class city located on U.S. Highway 64 in central Crittenden County, about halfway between Earle (Crittenden County) and Marion (Crittenden County). Crawfordsville benefits from a slightly higher elevation (ten to fifteen feet) in comparison to its immediate neighbors, and its history is largely unblemished by the devastation that floods have exacted on nearby communities. City establishment began as an outgrowth of the timber industry in eastern Arkansas during the post–Civil War era, and the opening of a railroad line through the community sustained city growth as its economy transitioned from timber to farming during the early twentieth century. Unlike other communities in Crittenden County that diminished or disappeared once the timber-rich acreage had been cleared, Crawfordsville continued to prosper as an agricultural community after its formal incorporation in 1912.

Crawford arrived in the area around the same time as the Swepston family, whose business interests in the city established the family’s prominence in local affairs for several generations. John Swepston hailed from Ohio and was associated with the Ware & Swepston Mill on Cypress Bayou north of the city; he also operated a local grist mill and a sawmill on Alligator Bayou west of the city. He served as county clerk on three occasions and was elected Crittenden County sheriff, though he never served in that capacity. His brother Smiley served as state representative during the infamous Arkansas General Assembly session convened by Governor Elisha Baxter in May 1874.

Wilsie Wise (W. W.) Swepston, one of John Swepston’s six children, became a leading area merchant and gin owner, establishing a store in Marion. He moved back to Crawfordsville in 1882, where he built a gin and opened another general mercantile business. Over the years, he was a member of the district school board, and also served as Crawfordsville postmaster, county assessor, county sheriff, and state representative to the Arkansas General Assembly on two occasions. Besides the Swepstons, many other families who migrated to the area are commemorated today; almost every street in Crawfordsville is named for an early city resident.

Timber clearing and sawmill operations dominated local trade following the Civil War until the early twentieth century, and the opening of a Missouri Pacific rail line through the city in 1888 encouraged timber interests near Crawfordsville to operate and expand. Other businesses that once thrived in Crawfordsville included the St. John Rod & Pump Sucker Company, which daily loaded out two or three cars of hickory, and the Gilt Edge Cooperage Company, which employed seventy people and produced 50,000 hoops each year. This railroad access facilitated commerce and also brought traveling salesmen who once utilized Crawfordsville for overnight respite—Crawfordsville at one time had four hotels within walking distance of the train depot. The depot closed in 1962 after passenger service on the rail line was discontinued.

Railroad access and plentiful timber provided the assets needed for economic prosperity, but the rule of white supremacy at the time meant that wealth was not accrued evenly. This socioeconomic condition can be viewed in an 1893 dispatch from a Crawfordsville correspondent for the Freeman, a black newspaper based in Indianapolis, Indiana. The dispatch took stock of racial relations with local whites and meted out criticism of black ministers who, in his estimation, did not utilize their positions of leadership well enough to advance the social and economic standing of their black brethren.

Starting in 1944, a prisoner-of-war (POW) camp was established on the southwestern outskirts of Crawfordsville to house captured German troops from north Africa. Crawfordsville was one of six communities in Crittenden County in which POW camps were established; these POWs were contracted out to local farmers for manual labor throughout eastern Arkansas, thereby supplementing agricultural manpower needed during World War II. The Crawfordsville camp closed in May 1946.

Men’s organizations that were once active in Crawfordsville have included the Crittenden Rifles, a militia and social group, and a Rotary Club, which was organized in 1940 and met for more than forty years. The most prominent women’s organization was the Crawfordsville Women’s Book Club, which began as a reading circle that met in members’ homes to exchange and review books. The club had two distinctions: it was the oldest women’s organization in Crittenden County, and it boasted the first clubhouse built and owned by women in the state of Arkansas. The clubhouse was built on Main Street in 1896 and hosted numerous community activities for more than fifty years. The club eventually became inactive in the mid-1950s, and the clubhouse was demolished in 1965.

The first school district in Crawfordsville was formed in 1869 and operated segregated one-room schools. In 1911, the first Crawfordsville High School was built and was attended by whites; this school was enlarged in 1935 but burned in 1966. During this time, and prior to integration, the school district operated numerous “wing” schools for black students in rural locations across the district. Incremental desegregation began in the school district starting in 1966. Following legal action from the Department of Justice, the district completely integrated by 1969, causing outlying wing schools to be closed. The most recent Crawfordsville High School was established at the site of one of these wing schools, called the McNeil School, which was located west of the city on Old Highway 64. An alternative school is run at the McNeil School site as of 2010. The students at this school come from across the Marion School District; most Crawfordsville children attend classes in Marion or West Memphis (Crittenden County). The Mississippi/Crittenden Regional Library System operates the Crawfordsville Branch Library on Main Street.

Today, ongoing development of a new gated subdivision on the east side of the city has begun to add more suburban characteristics to Crawfordsville. This expansion suggests that Crawfordsville is transitioning from a mostly farm-based community to more of a rural suburb, with most of its residents commuting to work in nearby Memphis, Tennessee.

Johnnie Harrison Taylor, who was a gospel and rhythm and blues singer, was born in Crawfordsville. 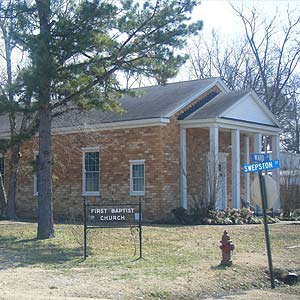