For parts of three centuries, the Arkansas Travelers baseball team has used only one nickname, played on only three home fields, and become owned by its fans, something unusual in professional sports—in 1960, shares were sold to fans to ensure that the team would not leave Little Rock (Pulaski County). In 1957, to draw fans from the entire state, management changed the name from the Little Rock Travelers to the Arkansas Travelers, making it the first professional team to be named after a state. In addition, five future National Baseball Hall of Famers played for the Travelers: Tris Speaker, Travis Jackson, Bill Dickey, Jim Bunning, and Ferguson Jenkins.

The minor league team had many failures in the Southern Association and many successes in the Texas League. In 1895, the Travelers opened play in the Southern League. They joined Atlanta, Georgia; Chattanooga, Memphis, and Nashville, Tennessee; Evansville, Indiana; Montgomery, Alabama; and New Orleans, Louisiana. Their season ended in July after just seventy-two games of the 137-game season. The team had a losing record, and fan support was poor. Little Rock had a 25–47 record and a .347 winning percentage.

After a five-year absence, partly due to the folding of the Southern League, Little Rock joined the new Southern Association, playing home games at West End Park. In 1901, things were different. The Travelers finished in second place, one game behind Nashville. In 1902, they again placed second. Team president William M. Kavanaugh was asked to become league president. He had been praised for his management as city editor of the Arkansas Gazette and as Pulaski County judge. He also had built the first skyscraper in Arkansas, his own Southern Trust Building.

The Travelers’ fortunes faded as 1910 approached, and for the second time, they dropped out of league play. Once again, many finishes in the league cellar caused attendance to lag. Kavanaugh continued as league president during the Travs’ absence. He worked to get them back in the league and announced, on February 20, 1915, that they would return for that season. The next day, he died of acute indigestion at age forty-eight. West End Park was renamed Kavanaugh Field in his honor. With their third entry into professional baseball, the Travs slowly began to advance in the standings. From last place in 1915, they climbed to second in 1918 and 1919 under manager Norman “Kid” Elberfeld. Their first championship came in 1920. They roared to first place with a fourteen-game winning streak and had a record of 88–59 for a .599 percentage. Outfielder Harry Harper led the league in hitting with a .346 average. He also collected the most hits with 196. Bing Miller had nineteen homeruns to win top honors. On the pitchers mound was Moses Yellowhorse, with a 21–7 record and a .750 winning percentage; Rube Robinson tied for the league lead with twenty-six wins.

Little Rock (later Central) High School experienced a growth spurt in the early 1930s and needed the land where Kavanaugh Field stood for school expansion. Kavanaugh Field and the land around it became home to the school’s Quigley Stadium. In 1931, the Travelers’ last season at Kavanaugh, they attracted 113,758 fans, the second-highest attendance since the title year of 1920.

Traveler ownership sought the city’s help in finding a new home. Land near the state hospital was awarded, and Travelers Field was born. In 1966, the field was renamed for Ray Winder. Winder had worked as a ticket taker in 1915 before rising to general manager. More than once, he almost single-handedly kept baseball in Little Rock. In 1960, at the last minute, he used his relationships with major league teams to sign enough players for the Travelers to field a team—it had looked as if the team would not make or would have to move to another town. During his fifty-plus years with the team, he saw the Travelers sink to the bottom of the league only to rise three times to the league championship.

In 1963, the Travelers began an odyssey around the baseball world. They started with the American Association (a AAA-class baseball league), which folded prior to the beginning of the 1963 season, so they played the 1963 season with the International League. They won their division but lost in the playoffs. In 1965, again in the PCL, they placed fifth while flying to Salt Lake City, Utah; Portland, Oregon; Hawaii; and Canada. Team owners enjoyed the on-field success but wanted to make money.

Former American League umpire Bill Valentine had taken over the general manager’s job in 1976 and proved to be a baseball version of P.T. Barnum. He coined the phrase, “Greatest show on dirt” but had to change the wording because of a lawsuit by Ringling Brothers Barnum and Bailey. Valentine sent a midget to the plate to bat in a game, had midgets wrestle, and offered jalopies to fans on Klunker Kar Night. Valentine’s antics and good teams kept Ray Winder Field alive. Despite occasional mediocre teams, the Travelers still drew approximately 200,000 fans a season.

In 1989, everything aligned for the Travelers. A talent-laden team won the league title and drew almost 300,000 fans. Gaylen Pitts was Manager of the Year as the team posted a 79–56 record and a winning percentage of .585. Ray Lankford was Most Valuable Player of the league while leading in hits. Bernard Gilkey led in runs. Dave Osteen topped the league in wins, and Mike Perez was the saves leader. The 1990s were a dry decade for league titles. Arkansas never climbed higher than second but still attracted 250,000 fans annually.

The new millennium in 2001 and a new major league affiliation brought another Texas League title. The Travelers and St. Louis parted ways, and the Anaheim Angels stepped in. Arkansas won the league championship after holding a 2–0 game lead over Round Rock the morning of September 11. When professional baseball shut down following the attacks on New York and Washington DC, the Travelers were awarded the league trophy despite protests by Round Rock.

The Travs were led by future major leaguers John Lackey, Robb Quinlan, Brendan Donnelly, and Chone Figgins. Also in 2001, all 140 games were broadcast on the radio. Phil Elson became the first Travelers announcer to broadcast a full season live.

In 2016, the Travelers signed a two-year player development contract with the Seattle Mariners.

[Submitted by Jerry Bylander, from an oral history given by Ernest Bylander] When they started the excavation for the stadium footings, my brother Ed was working for Ray Winder, who was the manager, and Roy Thompson of the Democrat P&L, who was president of the association. Ed drove one of the two track-laying tractors they used to dig in the heavy red clay, and I dont remember if it was him who stuck the big Monarch in the gummy clay or someone else. The Monarch was a tremendous machine, but it wouldnt pull the hat off your head. They got a couple of Holt Caterpillars and, with all three tractors pulling, finally managed to get the Monarch out of the hole. As Travelers Field was put on the southwest corner of the State Hospital grounds, the patients got in free. I remember seeing them lined up after most of the paying customers had gone in and then the attendants led the patients to their seats. Another thing I remember was when one of the older Hinkson boys climbed on to the first limb of a tall pine tree just outside the ballpark to watch the game, but slipped and fell out of the tree. Didnt hurt him much, but it broke the collarbone of the fellow he fell on. 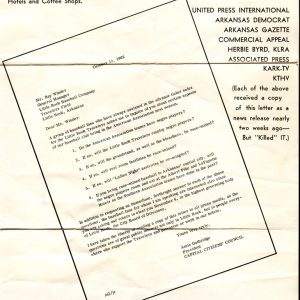